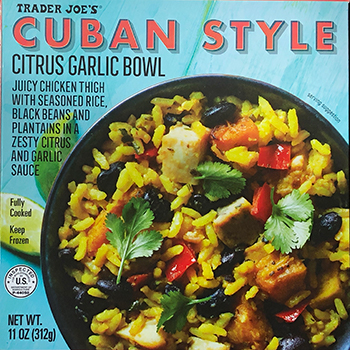 With restaurants here in Washington, DC closed and just about everyone staying at home to avoid COVID-19, the shelves of my local grocery stores are nearly bare of frozen meals. I'm disappointed, as I'd hoped that people would take this opportunity to cook a little more often, but I understand - they're quick and easy and won't go bad before you figure out what to do with them. (For those with produce at home, here's my Ask Dr. Gourmet question about whether produce can carry COVID-19.)

People love their Trader Joe's, and today we have two more meals from their freezer case. We began our tasting with the Cuban Style Citrus Garlic Bowl, which has 400 calories, 540 mg sodium (sodium to calorie ratio of 1.35), and a disappointing 1 gram of fiber. 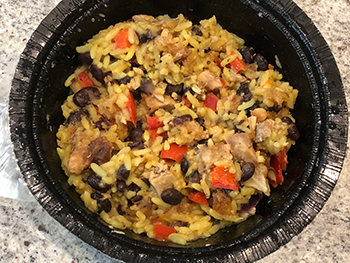 This starts out promisingly, with a lovely scent of cumin and chipotle along with the sweetness of orange, tart lime, and a hint of ginger.

Unfortunately, this looks and smells a lot better than it tastes. I suspect that if they had chosen to use brown rice instead of white rice it would not been as mushy due to overcooking.

The pieces of chicken are very small and while the texture of some bits were fine, others were dried out or even crunchy. They had clearly been marinated in a citrus-based marinade - and that's about all they taste like: orange juice, according to our panel.

The black beans aren't mushy - in fact they're as firm as you'd expect them to be - but there aren't enough of them to give this dish any real texture: even the red bell peppers are mushy. Overall, our panel was disappointed: "I thought something with Cuban flavors would freeze really well," a panelist said. "Guess you can ruin almost anything if you try hard enough."

The Sriracha Shrimp Bowl fares a little better in terms of flavor, but the numbers aren't quite as good: this has 320 calories, 690 milligrams of sodium (sodium to calorie ratio of 2.15 - ouch!), and less than 1 gram of fiber. 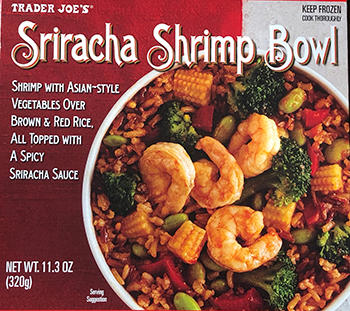 How do you have rice in a dish and have less than one gram of fiber? our panel wondered. The brown and red rice isn't overcooked but reminded us more of parboiled rice in that each and every grain is discrete.

The 5 shrimp - each about the size of a quarter - aren't too very overcooked, but as a panelist put it: "not too terribly over- ..okay, they're not quite rubbery." 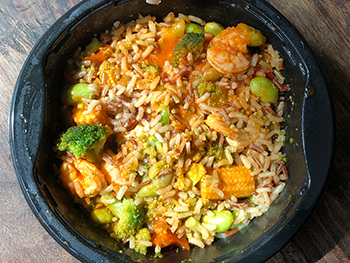 The broccoli is quite seriously overcooked, but the baby corn is plenty crunchy and the edamame lends texture, as well.

The sauce is definitely a sriracha sauce - in fact, that's all we can taste - "well, that and salt."

Just OK, as far as the panel was concerned. There are plenty of other good shrimp and rice options - we like Scott & Jon's Shrimp Risotto Bowl.

See all reviews of products from Trader Joe's »