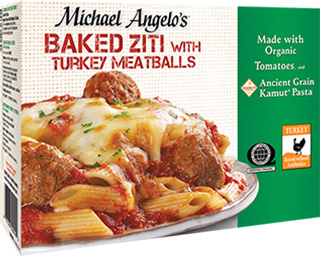 Today we're revisiting one of our oldest review items along with a new item. Michael Angelo's has an enviable track record with us here at Dr. Gourmet, with only 2 negative reviews. Their Lasagna with Meat Sauce included some of the best tomato sauce we've ever had in a frozen meal - what there was of it. It was that we were thinking of when the panel agreed to revisit their Chicken Parmesan - and the Baked Ziti with Turkey Meatballs is entirely new to us.

The panel chose to start its tasting with the new item. This is from Michael Angelo's "Organic" line, which boasts of organic tomatoes, "Ancient Grain Kamut Pasta," and antibiotic-free turkey to go with its substantial 380 calories, 600 milligrams of sodium, and an impressive 7 grams of fiber.

We were encouraged by the appearance of the meal just out of the package - even before we put it in the oven for its 4-5 minutes. "It looks like real food," remarked a panelist. "Like Mom just froze some leftovers for you." There's lots of grated cheese on top and the ziti look as if they're made from whole wheat flour.

As we cooked the meal we noticed that "Wow. It really smells like turkey."

"No. Like just turkey. Plain turkey. That's been left out for a while."

It's true - you'd expect a pasta dish to smell mostly of tomato sauce, but the overwhelming scent is that of turkey that might just be a little on the old side. The tomato sauce that we had such high hopes for is lightly tart, with a bright, vinegary tomato flavor, but that's it - we could detect only the faintest hint of spices - perhaps some oregano?

The panel described the pasta as "nearly al dente but on the uncooked side," which, to be fair, is a bit of a change of pace from the many times we've said that a pasta dish was nearly al dente but slightly overcooked. "Slightly chewy," said a panelist, and the rest nodded.

It was the meatballs who were to blame. There are five meatballs, all about the size of an American quarter in diameter, and I watched the faces of the panelists as they tasted them, all making about the same semi-disgusted face. "They're... odd," they said. "Too smooth." Inspection of the cross-section of the meatballs reveals a ground meat so fine-grained as to lead me to believe that the meat was nearly pureed before being formed into balls. There are a few flecks of green in these dense little balls, but overall they're, yes, oddly featureless. And they taste "incredibly strongly" of turkey. "Like, that's all you can taste." Chewy pasta, plain sauce, meatballs that taste almost 'off'? Leave this one alone. 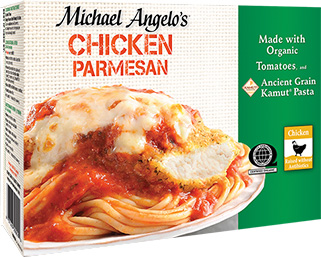 The Chicken Parmesan also looks promising right out of the box, with plenty of cheese grated on top. There are two pretty substantial piece of breaded chicken that from their shape appear to be chicken cutlets. We expected to be able to cut into them with a fork and found that a knife was definitely required - but we took that as good news because it revealed that the chicken is clearly whole pieces of actual chicken meat, not chicken that's been processed and reformed into shaped patties. The spaghetti pasta, also made with Kamut, is truly al dente, so it's quite possible that the problem with the ziti might have been undercooking.

While the chicken here, although a touch on the dry side, doesn't take over the dish as the turkey did, it didn't exactly impress anyone on the panel as being flavorful, either. And that carries over into the rest of the dish: while the sauce has somewhat more spice than the ziti, it still tastes "as if they were trying to make it as inoffensive as possible."

Add that the breading is spongy and tastes as if it were made with "plain breadcrumbs... and nothing else," and you have a second dish that we don't feel is worth your time in light of the higher level of sodium (630 milligrams in this dish, with 350 calories and 7 grams of fiber). Very disappointing, Michael Angelo's.