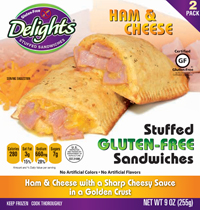 A representative for Delights Stuffed Sandwiches emailed us recently and asked if they could send samples for testing. This happens occasionally and we are happy to do it, because it gets expensive reviewing all the bad food that we have to review. We do warn companies and even send them links to reviews of similar products, so that they can see we can be quite honest about what we think. The nice lady was undaunted. She wanted to send product. 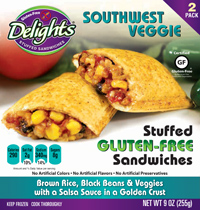 The Delights are essentially a gluten free Hot Pocket and it was surprising that they contain a decent amount of fiber even though they don't have a lot of veggies. It's rare for gluten free products to have a significant amount of fiber so that was refreshing. Most of the flours used in this product appear to be whole grain gluten free flours. On the minus side is, as is usual, the amount of sodium - most of the ones they sent come in at more than 600 milligrams - over 2 milligrams of sodium per calorie.

First up was their Ham and Cheese. We had very low expectations. Face it, Hot Pockets suck and almost every version that we have tried is terrible. Coming out of the microwave after 2 minutes the first thing we noticed was the aroma of yeasty pizza dough. That's what the texture of the wrapping is - slightly underdone pizza crust. The flavor is surprisingly good for the pocket sandwich genre with predictable tiny cubes of ham in a cheese sauce. The other flaw of pocket sandwiches like these is that the dough to filling ratio is almost always too high and that is the case with the Delights. They would be a lot better if there were more filling. What you do taste, however, is salt. Not surprising because of the ham and cheese, but it tastes like it contains added salt as well. 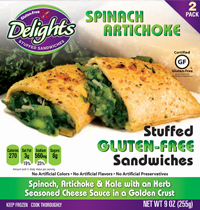 The high dough to filling ratio was fully evident in the Southwest Veggie version. It did have the same yeasty aroma mixed with cumin. It appears that the dough has been dusted in spices and that's the flavor that comes through - cumin with a bit of cayenne. Because there is very little filling to offset the harshness of the spices, this product really fails. It's a shame, because tasted on its own, the stuffing of salsa, onion, jack cheese, and corn is pretty good, but it needs more sauce to balance the bulk of the dough. Sadly, there's just not enough and this is doubly disappointing because the sodium comes in at only 340 mg with a solid 6 grams of fiber so this could be a really good choice with a bit of tweaking.

There is a pattern here and the Spinach Artichoke variety is more of the same. Too much dough, not enough filling with a lot of unnecessary salt. The flavor of this one was flawed with simply too much dried Italian herb mixture that reminds me of the terrible New Jersey pizza joints I grew up eating in. 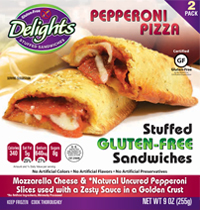 That theme continued with the Uncured Pepperoni Pizza flavor. This one is like a miniature calzone and the dough to filling mixture was almost right. The pizza dough is filled with a thick tomato sauce that is pretty well balanced to mimic a New Jersey Shore pizza place. If they trimmed the added salt so that this was around 500 milligrams, instead of the 640 milligrams of sodium, it would be the first pocket style meal we could recommend without reservation.

We were encouraged enough by this product to also follow the instructions for heating in a conventional oven. While this product doesn't really get our vote for you to rush out and purchase, it is actually saying a lot that we wanted it to be better and took the time to try the oven (thinking that the crust might turn out crispier and help to mask the too high dough to filling ratio).

It helps. Not a little but a lot. The dough is much tastier and the texture comes out quite good. There is the inconvenience and expense of heating the oven to 350°F and waiting 30 minutes, but that improves these products immeasurably. Not enough for us to recommend, but we are hoping that the people at Delights might lower the sodium and increase the filling: they would then have a very fine product.