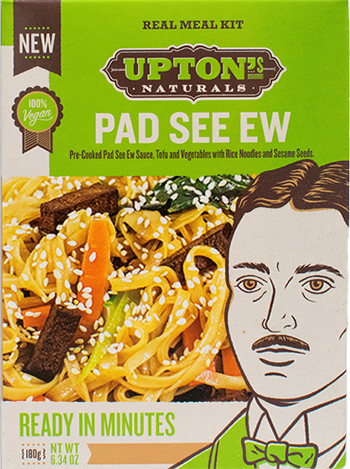 Today's offerings are another stop in our tour of the shelf-stable noodle bowl aisle. I'm more familiar with Upton's Naturals from seeing their vegan meat substitutes in the refrigerator section but was intrigued by these packaged meals. They are labeled "Real Meal Kit" and are "ready in minutes," and the product description on the packaging makes them sound like they're more than just noodles and some flavored sauce.

I almost didn't bring them in for testing, however, because each package is 2 servings. Still, as my wife pointed out, even if you consumed the entire package (doubling the nutrition information), the numbers are acceptable (if not particularly good) as convenience meals go: the Pad See Ew has 190 calories per serving, with 330 milligrams of sodium and less than 1 gram of fiber. Double that (because who's going to eat half the package?) and that's 380 calories, 660 milligrams of sodium, and something less than 2 grams of fiber.

The Thai Spaghetti is 160 calories per serving, 210 milligrams of sodium, and 3 grams of fiber, meaning its true count is 320 calories, 420 mg sodium, and 6g fiber: not bad for a convenience meal - if it's actually a meal and not just noodles with sauce.

We opened the Pad See Ew first. The package contains a packet of dry rice noodles, a metallic pouch full of sauce, and a small envelope of sesame seeds. The microwave instructions have you placing the rice noodles in a bowl, adding 1/2 cup water and the sauce, and microwaving for about 4 minutes before garnishing with the sesame seeds.

The packet of rice noodles didn't look like two servings, so we weighed them, and true enough, there are only 1.8 ounces of noodles in the package. Again - this is labeled two servings but clearly is not. The standard serving size for pastas of any kind is 2 ounces and this doesn't even contain one serving.

The sauce did seem promising, however: it has a "sort of generic" sweetish soy scent, and there are actual pieces of Chinese kale that look much like the greenery you get in bowls of miso soup, plus julienned carrots and dark brown chunks of tofu. 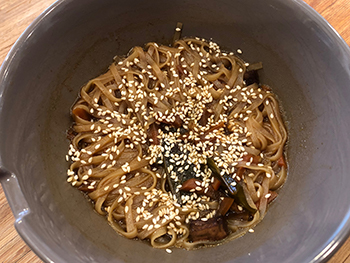 It's hard to tell from the picture just how small this bowl of noodles is - it doesn't even half fill the bowl. The noodles are surprisingly well cooked and hold together nicely, but the tofu, while firm almost to chewy, tastes "a bit sour." None of the vegetables - not even the carrots - have any texture whatsoever. Not even the sesame seeds give this any real texture. In short, as one panelist said, "This is a very small bowl of rice noodles with a moderately salty but weak teriyaki sauce." Another added, "It's not bad... but it's just not really anything."

How this managed to have so little flavor when the second ingredient (after rice flour) is sugar, and salt appears in two different forms in that list (both "salt" and "sea salt") is quite beyond our understanding.

The Thai Spaghetti seemed much more promising after that disappointment. 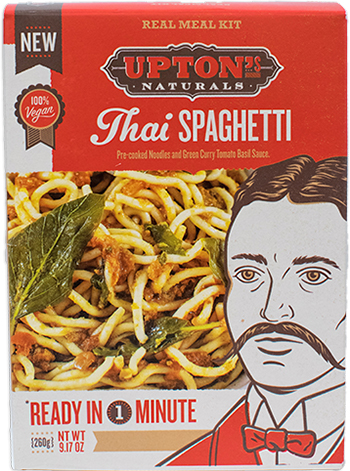 The first positive mark for this dish is that the Thai Spaghetti's noodles weighed in at 5.1 ounces - which makes it truly two servings (why didn't they do that with the Pad See Ew?) Unlike the rice noodles, however, which were dry, these are pre-cooked (blanched, really) and have an odd scent: "Smells like pickles," remarked a panelist. Nor does this dish require extra liquid - you just pour the contents of the two packets into a bowl and microwave.

The packet of sauce looks much like your typical tomato-based pasta sauce, but aside from a few tiny bits of kale (that could be confused with oregano - it's that small) there are no vegetables in this whatsoever. 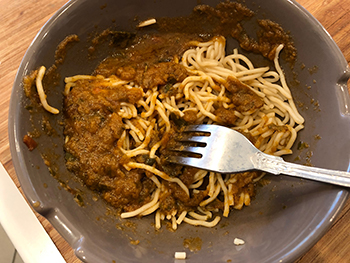 Doesn't look very appetizing, does it?

It's not. The pasta comes out not quite cooked enough - it's far more chewy than it should be. The sauce, while moderately spicy with that light burn you expect from Thai food, tastes overwhelmingly of lemongrass. And when I say "overwhelmingly" I mean that's all you can taste. "Yuck," said a panelist.

These Upton's Naturals Real Meal Kits might have "a real meal made with real food" on the package, but we'd almost prefer fake food. Don't bother with these noodle bowls either.