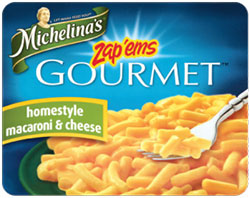 It's been more than 4 years since we lasted tasted anything from Mic helina's. They have the dubious distinction of being one of the few companies whose foods we've tested that have received uniformly poor reviews - in fact, their Lean Gourmet Creamy Parmesan Chicken is still one of the worst frozen meals we have ever reviewed. Most of the meals have suffered from a lack of flavor, with their Lean Gourmet Chicken Alfredo Florentine being "not cheesy, just gooey."

But after four years you might think they would have changed somehow, so we chose what we thought might be some good, basic pasta meals.

The Homestyle Macaroni & Cheese (270 calories; 580 milligrams sodium; 1 gram fiber) resembles nothing so much as the Kraft mac and cheese from the blue box: the same extra-thin macaroni noodles are covered with the same day-glo yellow-orange sauce. The pasta is overcooked, just like the Kraft, but there the resemblance ends. While the sauce here is far more creamy than the Kraft, which has a tendency to betray its powdered origins in a bit of graininess, this has far less true cheese flavor than the Kraft. As we've seen in the past with other Michelina's products, the sauce just lacks flavor: it's more scented than flavored. If you like your mac & cheese really subtle, you'll enjoy this, but we have to give it a thumbs down. There are other mac & cheeses with more flavor. 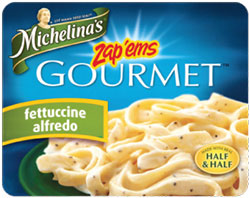 The good news is that their Alfredo sauce has much improved. Their Fettuccine Alfredo (280 calories, 530 milligrams sodium, 2 grams fiber) touts "made with real half & half" on the box, so when we stirred the pasta and sauce halfway through cooking, my heart sank a little bit: the sauce was looking a bit chunkier than I'd like. Was the sauce broken? Had the cooking curdled the half & half?

Fortunately, it had not. While the pasta noodles were a bit chewier than we'd like, the panel found this to be a pretty good Alfredo sauce, complete with cracked pepper. There's the classic thick and creamy mouthfeel along with soft flavors of parmesan and asiago. Subtle, yes, but not bland. As with many pasta meals, the down side of this one is that it lacks a vegetable, but that's easily corrected with a small side salad or a piece of fruit. Finally, a thumbs-up. This will make a pretty satisfying lunch.