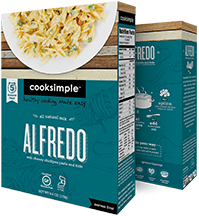 When I am teaching physicians about Culinary Medicine we use Hamburger Helper as one of the examples to illustrate that it is cheaper and faster to cook your own meals. We have reviewed such products and done a head to head comparison here at DrGourmet.com, and it is always less expensive and just as fast to make your own fresh dinner. And always tastier.

But we keep seeing products that offer promise. At least that is what the package tries to convince us of.

cooksimple has a line of gluten-free boxed pasta products it appears that is the case. Boil water, add pasta, drain pasta, add milk, butter, and the seasoning packet and you have... something. Your basic Kraft Mac and Cheese product, but purportedly healthy.

Looking at the Nutrition Facts, however, it is not a lot better than the Kraft or Hamburger Helper. Their Stroganoff contains 365 calories in a 3/4 cup serving once prepared. There are 4 servings in the box. I know that people are not stupid, but companies like Kraft and cooksimple must think we are, because three-quarters of a cup is not a serving of pasta. That means that the two cups you will actually consume (half the box) is 730 calories and contains 38 grams of fat and 720 milligrams of sodium. The only redeeming value is that the 1 1/2 cups offers you 14 grams of fiber.

The numbers for their Alfredo are similar, but with just a bit fewer calories, sodium and fiber.

These meals, as we have shown before, take just as long as you making your own pasta dish because this is determined BY THE TIME IT TAKES TO BOIL THE PASTA. Yes, that is me hollering. Hollering from frustration that these companies have successfully convinced the majority of us that it is quicker to make their product. It is not, despite cooksimple's claim on the front of the box that their products have a "5 minute prep" time.

Rant aside, what about the final product that you get with cooksimple? How does it taste? The Alfredo is disgusting. This is not bad Alfredo, it is terrible Alfredo. The pasta turns out gooey - we watched it like a hawk because bean pastas are notorious for being undercooked one second and overcooked the next. This still came out a glop of pasta, stuck together by a gluey sauce that sort of tastes like cheese (emphasis on the "sort of"). 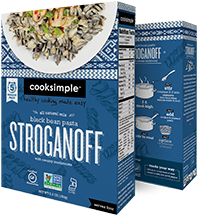 Unlike the Alfredo, the Stroganoff is not disgusting. It is inedible. The black bean pasta shattered into thousands of pieces even though we watched this constantly because the experience with their "cheesy bean pasta" in the Alfredo was so bad. After adding the milk, butter, seasoning packet, and sour cream this looked a lot like, well, I am not sure I want to say in print. There were a lot of descriptions floated during the tasting, however. In the end we decided on the phrase "a pile of black pasta like substance." ("Vomit" was another popular description.) It seems impossible for it to taste more unappetizing than it looks, but it does. The flavor is so strong and acrid that I could only take two bites. One taster described this as the copper flavor that you get if you suck on a penny.

I do wonder if the people who make products like this actually eat them or take them to anyone for tasting. Are these just made by a computer algorithm now? Does no one actually take them home and say to their husband or wife, "Honey, cook this for me and tell me what you think?"

We think the tagline for cooksimple should be "bringing a new dimension to portion control," because you will make the pasta and simply put it straight in the trash. After these products spoil your appetite, you will certainly lose weight.

For the sake of comparison, we went to our local grocery store and figured out how much it would cost you to make our versions of Hamburger Helper Stroganoff as well as our gluten-free Fettucine Alfredo. Our stroganoff includes ground beef and fresh mushrooms and costs $3.67 per serving. Adding $2.98 for 1/2 pound of ground beef takes cooksimple's product to a total of $7.97 for two servings, or $3.99 per serving. Similarly, making our Fettucine Alfredo recipe is $2.86 per serving for the gluten-containing version and $2.97 per serving for the gluten-free version - and both come with more food and much better flavor.

We haven't yet found a boxed convenience meal that tastes better or costs less than cooking it yourself, but we are suckers here for pretty packaging so we'll keep eating bad food so you don't have to.