The first choice I made was to bake bread from a mix. My reasoning was that most baked gluten free breads are found in the freezer case. While I have kept bread in the freezer it's a little different because the bread is purchased fresh, frozen and used in a short period of time. Gluten free breads are often kept frozen in grocery stores for months at a time which can have an effect on the moisture content and thus the texture of the bread. Likewise, these might suffer from poor handling being thawed and refrozen.

The Gluten Free Pantry brand Favorite Sandwich Bread is a bread mix that's easy to use in a bread machine. Dump, add water, egg and oil and bake. Simple but the result is only fair. 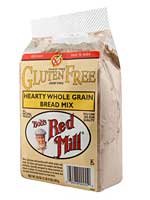 The gluten in wheat flour is what gives bread the elasticity to trap the carbon dioxide formed by yeast and stretch in such a way to give bread its light texture (called the "crumb" by bakers). In all of the breads tasted they suffered from a dense texture that turns to being quite grainy as the bread is chewed. This bread mix is no exception but it was one of the grainier. The real problem is that there's no flavor at all. Bland and tasteless is how it was described.

The better choice for your bread machine is Bob's Red Mill Hearty Whole Grain Bread. The texture is only fair being grainy like other gluten free breads but the flavor is similar to whole wheat bread. This is as close to wheat bread as any bread sampled and best of all it has 4 grams of fiber per slice. 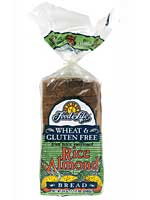 Whole Foods has a freezer case that is labeled "Gluten Free Bakery" that contains breads, muffins, pies and the like. Their Prairie Bread is pretty good. The slices are small and the crumb is more dense. Every one of their breads tried (this included a sun-dried tomato version) was far too dry and that combined with the size makes it impossible to use for sandwiches.

Food For Life is ubiquitous in the gluten free sections of health food store. Their fruit juice sweetened Brown Rice bread is pretty good. It has a flavor that is as close to whole wheat bread as you can get and, unlike most gluten free breads, it has 2 grams of fiber in a single slice. The slices are not as small as the Whole Foods versions. 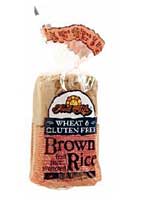 What about bagels? Dense and yeasty bagels. Could there be a gluten free bagel that measures up? Well, yes and no. Udi's gluten free plain bagels are good. They are not as dense as bagels made with wheat flour but lighter and lesss yeasty. They're pretty good and while not the perfect bagel the best of the breads that we tasted. The bad news? They're 280 calories (although they do have 3 grams of fiber).

Uniformly the breads we tested made sandwiches that weren't great when compared head to head with wheat breads. All were better with something that offers some moisture like peanut butter but pretty much inedible for a ham and cheese sandwich. The good news is that the breads are good for making open faced sandwiches like Tuna Melt or for making cheese toast or grilled cheese sandwiches.