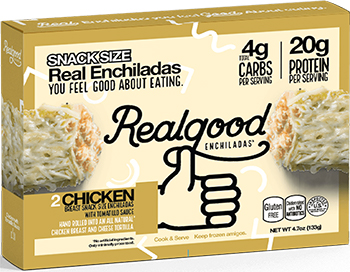 I found Realgood Foods on the shelf at my local Winn-Dixie. At first I thought they might be some kind of store brand - their packaging has that almost generic look to it. To be honest, it was their pizzas that caught my eye (along with the "Gluten Free" on the label), but like many single-serving pizzas, the sodium levels were way too high. Their Personal Pepperoni pizza might be only 250 calories, but it has a whopping 990 milligrams of sodium. The Personal Three Cheese is slightly (slightly) better, at 230 calories and 880mg sodium, but their Supreme has the same number of calories as the Pepperoni and 950 milligrams of sodium.

Still, it's not often we find a new frozen food company, so I looked at their other products. The enchiladas weren't quite as high in sodium, so I brought two home to taste.

When I was diagnosed with Celiac disease a few years ago, it turned out to be a bit of a mixed blessing, at least when it comes to the frozen food reviews we do here at Dr. Gourmet. Most of the foods we review aren't gluten-free, so on the one hand at least I don't have to live up to our unofficial motto of "We eat it, so you don't have to." Certainly it's been great to have our ever-changing group of tasters to lend their opinions. On the other hand, I do sometimes miss doing the reviews myself. Today's review reminded me of all the reasons we have that motto.

At random I selected the Chicken Enchiladas to review first. These have both microwave and oven instructions, but as usual I put these in the microwave. While they cooked, I read the packaging more closely. On the front of the package it says, "hand rolled into an all natural chicken breast and cheese tortilla." I pointed this out to my wife: "That doesn't make sense," she said. "Shouldn't it be 'chicken breast and cheese in a tortilla'?"

Evidently not, at least according to the Ingredient Information. Clearly marked is "Chicken Tortilla," containing chicken breast, parmesan cheese, water, salt, sunflower oil, and "natural flavor." Interesting: a tortilla made of chicken and parmesan, not a corn tortilla, as I had expected. That's when I noticed that the packaging also says "grain free." 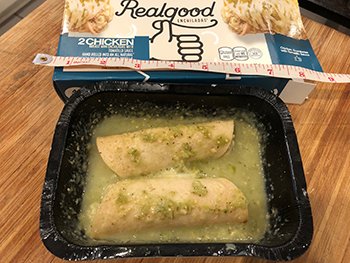 The tortillas certainly look a lot like they might be corn tortillas. They're thicker than most flour tortillas I've seen, and each is about 4 inches in diameter. The dish's tomatillo sauce smells rather bright - almost vinegary - but that's not unusual with a tomatillo sauce. Often they are well tempered with a bit of cheese, protein (like chicken or pork), or even mushrooms. I cut both of the enchiladas in half and observed that the tortillas are certainly generously filled, with each rolled-up tortilla being about 3/4 inch in thickness.

Then I took a bite.

The enchiladas aren't quite as high in sodium as the pizzas from Realgood Foods. This is undeniably true. But when you look at the milligrams-of-sodium-per-serving ratio, it all falls apart. For example: the Pepperoni Pizza by Realgood Foods has 250 calories and 990 milligrams of sodium. That's 3.96 milligrams of sodium per calorie, which according to my wife, "ought to just scare you."

The Chicken Enchiladas have 190 calories and 630 milligrams of sodium, or 3.32 milligrams of sodium per calorie. Quite frankly, I should never have brought these home for review at all: these enchiladas taste like something I might have put out in the fields of my 65-acre farm in Northern Virginia to attract deer: salty. SALTY.

Not quite, but almost worse yet is the fact that the filling of the 'chicken breast and parmesan' tortillas has the texture of pre-chewed chicken - as if some giant animal had chewed the chicken thoroughly before expectorating it into the waiting tortilla. 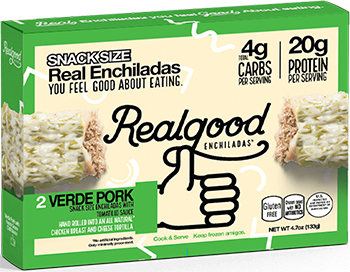 The Verde Pork, despite the fact that its Ingredient Information has the pork filling listed before the chicken-and-parmesan tortilla, is little better. Sure, I can taste the filling slightly more than I could taste the chicken filling, but the fact remains that this is nothing but a sodium bomb.

After tasting today's products I visited the Realgood Foods website and found out that their product line appears to be catering to the low-carbohydrate market (hence the chicken-breast-and-parmesan tortilla). They post multiple comparisons of their products versus similar products from mainstream companies like Amy's, and of course those comparisons paint Realgood Foods in a very positive light. One example compares Realgood Foods' Beef Enchiladas (4g carbohydrate, 20g protein) to an unnamed Amy's enchiladas product with 18g carbohydrates and 9g protein per serving. If all you're interested in is high protein and low carbohydrates, then of course the Realgoods enchiladas look like the better choice.

Note, however, that the Realgood Foods Beef Enchiladas have 190 calories, 10 grams of total fat, 770 milligrams of sodium, and 2 grams of fiber in addition to their 4 grams of carbohydrate and 20 grams of protein. The Amy's product they compare to (the only enchilada with 18g carbohydrate and 9g protein per serving, but which also has 2 servings per package) has 240 calories (per serving), 14 grams of total fat, 440 milligrams of sodium, 18 grams of carbohydrate, 3 grams of fiber, and 9 grams of protein.

The Amy's product is 9.0 ounces per package (and 2 servings) as opposed to Realgood Foods' 4.7 ounces and 1 serving. For about the same weight of food per serving, with the Amy's product you get 37% more calories, a sodium-to-calorie ratio of 1.83 (as opposed to 4.05 for the Realgood Foods Product), and yes, less protein per serving. So what? The Amy's product, despite its possibly misleading labeling (who's going to eat HALF of a frozen meal?) is far more likely to be satisfying than the overly-salty meal from Realgood Foods. Neither are particularly good for you, but the Amy's is likely better for you in terms of sodium-per-calorie as well as overall satiation.

The lesson here? That's it's important to read the packaging thoughtfully and thoroughly, and consider your goals when purchasing frozen meals. Ask yourself what your goal is: reducing total calories or sodium, or something else?