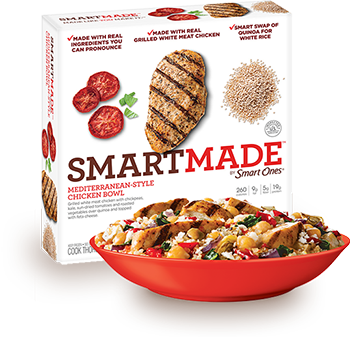 It's not every day that we run across what appears to be a frozen food brand that's entirely new to us here at Dr. Gourmet. Today's offerings are branded "Smart Made" with "by Smart Ones" in tiny letters - and for those who might be paying more attention than most, you'll recognize "Smart Ones" as the brand that brings you the frozen foods labeled Weight Watchers.

The numbers on these are encouraging: according to the Smart Made website, there's only one variety that has more than 650 milligrams of sodium, while the vast majority of the varieties are in the 500-milligram range. For frozen meals, that's pretty good. I'm a bit dubious of the claim on the back of the box, however: it says "Made like YOU make it." (They've even trademarked that phrase.) Given the demands of frozen food manufacturing, I'm pretty sure that they didn't have individual chefs standing over hot stoves doing the actual cooking of these meals, but now that I've pointed this out, I'll let it go. It's frozen food, after all.

We selected our first review item more or less randomly from the two I brought to today's tasting: the one that we first grabbed out of the freezer. This turned out to be the Mediterranean-Style Chicken Bowl (260 calories, 510 milligrams of sodium, 5 grams fiber), which according to the package contains "real ingredients you can pronounce," "real grilled white meat chicken," and "[a] smart swap of quinoa for white rice." The first two claims aren't unusual (although of course the implication is that they are unusual), but the third is a good point: whole grain quinoa is definitely better for you than white rice, and this shows in the 5 grams of fiber.

More importantly, of course: how does it taste? The panel was really pleased with this dish. (Note that while this variety does not contain any gluten-containing ingredients, it is not certified gluten-free so I did not taste it.) The scent of tart feta and sun-dried tomatoes is truly appetizing, "like a good pasta dish," and the panel noted that the garbanzo beans (chickpeas) lent this dish a bit of texture, as did the quinoa, which tends to have a bit of crunch all on its own. We had to give due props to the "real chicken" claim on the front of the box: the 2 larger and 2 smaller pieces of chicken do have a fire-grilled flavor and a slightly stringy texture - "like actual pieces of chicken." The dish includes sweet red bell pepper, tart red onion, a touch of garlic along with the chicken for umami, and perhaps a little too much salt (likely from the feta). "Wow. This is a lot like real food," said the panel. Highly recommended. 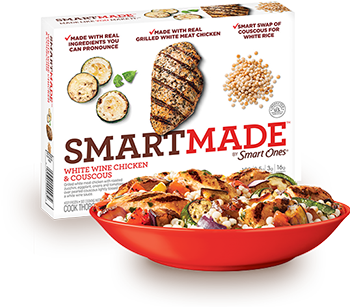 Our second foray into this brand, at least compared to the first, was disappointing. The White Wine Chicken & Couscous has 190 calories, only 500 milligrams of sodium, and far fewer grams of fiber at just 3. This is due to the presence of couscous in the dish, which I must point out is NOT a "smart swap... for white rice," despite the claims on the front of the box. Couscous is made from refined wheat flour; given the choice I think I would rather have white rice, which at least is closer to a whole grain than refined, ground wheat flour rolled into balls.

It would seem to be the couscous that sunk this variety in terms of flavor. The panel reported that while the dish smelled of white wine and zucchini, the actual flavor of the sauce was almost too faint to detect: "More scented than flavored," they said. On the positive side the zucchini and other vegetables have a nicely smokey, roasted flavor to go with basically the same chicken as in the Mediterranean Bowl. The couscous was "basically flavorless," they said, "it's basically plain pasta, right?" Indeed. Quinoa would have lent its nutty flavor to the dish and added fiber, as well. Given a choice between the White Wine Chicken & Couscous and the Mediterranean-Style Chicken Bowl, leave the couscous on the shelf.