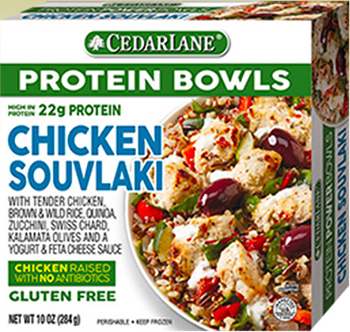 It's been three years since we last reviewed a CedarLane product. Those were actually frittatas from "CedarLean" (that is, "CedarLean by CedarLane" according to the package) and were really good: the panel said, "Forget McDonald's."

As I mentioned then, we've avoided reviewing many of their products because they were single single-serving packages that were labeled 2 servings. While I understand that CedarLane might be hamstrung by USDA regulations for serving sizes or whatnot rather than being intentionally misleading, the fact is that the label is misleading and CedarLane could have changed the packaged portion accordingly.

Today's offerings turned up in a local grocery store, and you can bet that I read the package very carefully to be sure that they were 1 serving (they are). Both are gluten-free and are emblazoned "PROTEIN BOWLS" on the front, with the number of grams of protein prominently featured. They're not the first company to want to cash in on the high-protein-diet craze, nor are they likely to be the last. 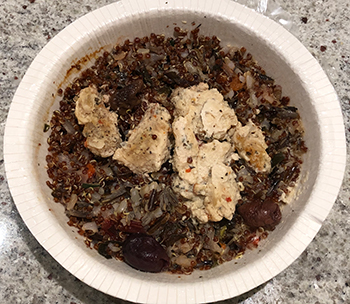 I first tasted the Chicken Souvlaki, which has 300 calories, an impressive 620 milligrams of sodium (and I mean "impressive" not in a good way), and 2 grams of fiber. On the front of the box it states that the dish has "tender chicken brown & wild rice, quinoa, zucchini" etc., which on the one hand is great - brown rice! - but on the other hand, there can't be all that much brown rice with only 2 grams of fiber.

This proves to be the case: The aforementioned grain mixture is mostly quinoa (presumably to up the protein content), with some overcooked brown rice and some wild rice for flavor. The chicken in this dish is just a little dry, but it does have a nice tartness that comes from being marinated in yogurt and perhaps some vinegar.

On the down side, the vegetables seem to have been lost in this dish: I spotted a few small stems for the Swiss chard, perhaps a half dozen chunks of diced zucchini, and some stray red bell pepper bits. Why the 3 kalamata olives were left whole is beyond me, as if they'd been sliced they would have added flavor to the whole dish rather than three bites. The feta and yogurt sauce can be tasted, but goes unseen. All in all, it's... OK. 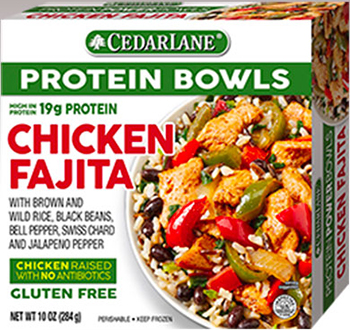 The Chicken Fajita Protein Bowl has the same number of calories, but slightly less sodium (590 milligrams - still a lot) and twice the fiber at 4 grams. This dish has the same overcooked brown and wild rice as the Souvlaki bowl, but adds black beans rather than quinoa. 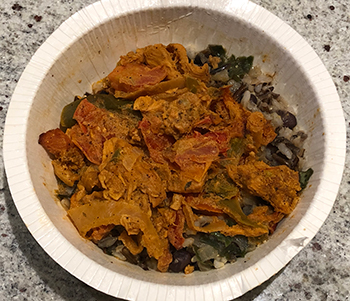 Is that orange color as offputting to you as it was to me?

Granted, I don't eat fajitas very often, but I don't recall chicken fajitas being orange. I looked at the packaging to see if I could figure out what the intention was, and here it is: "...all marinated in a spicy citrus sauce..."

That - and the appearance of "orange juice concentrate" in the ingredients listing certainly explains why the dish tastes of - you guess it - oranges.

Yes, as you would expect with fajitas there are red and green bell peppers as well as onions cut into strips (and overcooked into stringy mush). The chicken is cut into very thin slices (and is thus dry, dry, dry). You can taste the chiles used in the sauce in the background, but the foregrounded flavor is very much sweetish orange.

I really wanted to like both of these, but while the Souvlaki is just OK, the Fajitas are a hard pass. There's plenty of better Mexican foods in the frozen aisle. Try something from Frontera instead.

See all reviews of CedarLane Foods »