Lentil Soup and Chicken Noodle Soup (both no salt added) 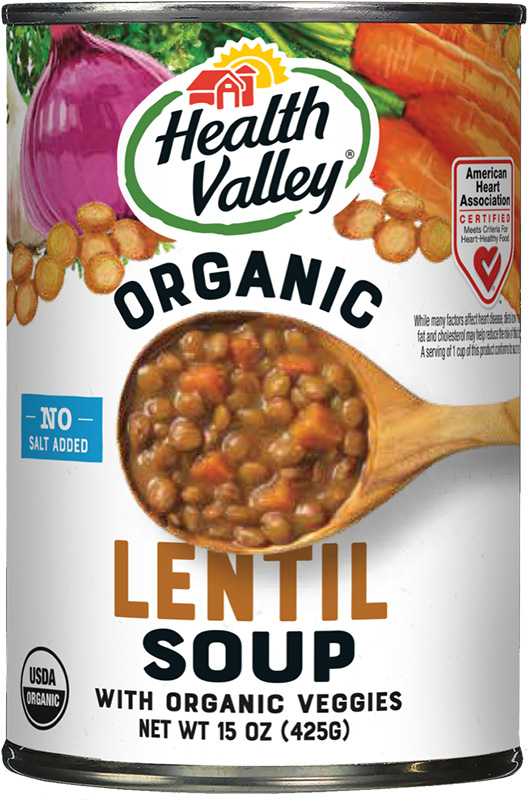 Just a couple of weeks ago we reviewed two no-salt-added soups from Health Valley. These were the first no-salt-added soups I think I've ever encountered, and I hope they won't be the last. For those who need to stringently control their sodium intake, these soups are a real blessing, as they can either eat them as is or add a (tiny) bit of salt if they feel it's necessary.

Today we have two more no-salt-added soups from Health Valley: their Lentil Soup as well as their Chicken Noodle Soup.

As with the other two no-salt-added varieties, these are labeled with nutrition facts for "per serving" (approximately 1 cup) as well as "per container" (what most people will actually eat). The entire can of the Lentil Soup has a very reasonable 270 calories, with an almost vanishingly small 35 milligrams of sodium but an astonishing 16 grams of fiber.

Now, for most people the Lentil Soup will definitely be under seasoned in the sense of lacking salt (no surprise). Yet there's a smooth tomato and lentil flavor and the cumin in the dish comes thru clearly without being overpowering. The diced carrots add a touch of sweetness although we could wish they were a little less well cooked. A very tasty and satisfying bowl of soup, to be sure.

Out of curiosity we added 1/16th teaspoon of salt and found that the flavors really came alive. If you are on a reduced-sodium diet you will enjoy this one - whether you have it as it comes out of the can or if you are able to add just a touch of salt, as we did. 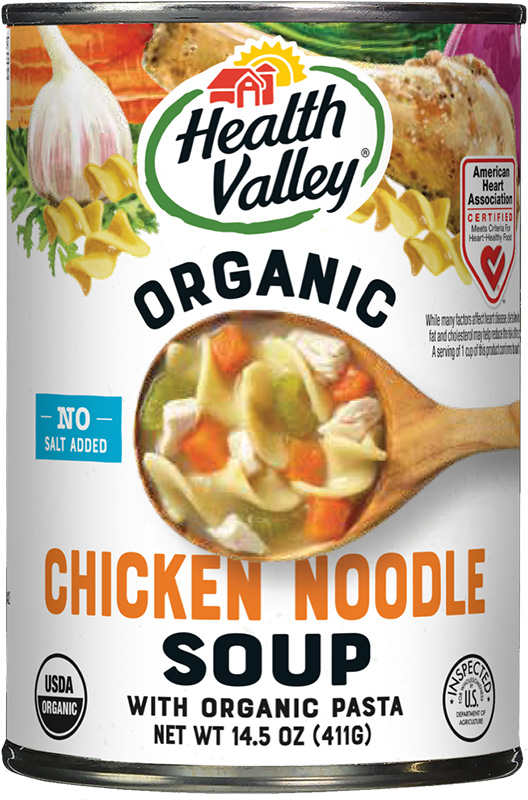 At first glance the Chicken Noodle Soup was not promising: the entire can of soup is only 140 calories, has 220 milligrams of sodium, and a paltry 2 grams of fiber. It just didn't look like there was enough chicken and noodles to really be satisfying.

The sodium in this dish almost certainly comes from the celery - it's a surprisingly salty ingredient. The twists of noodles aren't overcooked and have some bite to them, and the almost inevitable comparison to Campbell's Chicken Noodle Soup is occasioned by the tiny, chewy bits of chicken.

Those chewy bits of chicken have a fine chicken flavor, however, and it's the broth that really outdoes the Campbell's: the broth in this soup is cloudy with rich, savory chicken flavor, reminding me that Health Valley used to make the best-tasting chicken broth around (it has apparently been discontinued).

Both of today's soups are highly recommended for those watching their salt intake. Kudos to Health Valley for proving that canned soup doesn't have to be over-salted to be good.