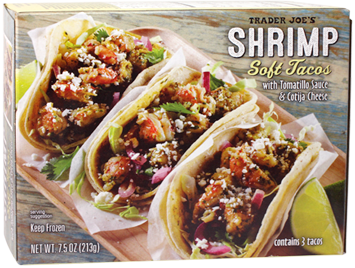 I have never understood the success of Trader Joe's. I was talking with a foodie friend of mine who swears by them, and I told her that in my experience, at Trader Joe's the produce is usually wilted, the fish is poor in quality and at least a day old, the bakery is just so-so and the meat department nothing special. Truthfully, almost any grocery store in America has better quality products now. Her response was that it was all about the stuff in the middle of the store. She said, "Their convenience foods are as good or better than anybody's."

So we have taken on the task of reviewing some of their products lately. This week starts with their Shrimp Soft Tacos with Tomatillo Sauce and Cotija Cheese. We have yet to find a frozen taco that reheats well, and that makes sense. The corn tortillas are more likely to get dry during microwaving, and the ingredients inside turn at least part of the shells to mush.

Spoiler alert: This taco met every expectation that I had for it.

There are three tacos and they are in a clever cardboard rack to hold them in place but, as expected, the bottom of the taco turns to mush and the top of the tortilla is too chewy to eat. Understandable, but tacos are as much about the filling, right? Well Trader Joe's fails there too. The shrimp is certainly shrimp flavored - but not in a good way. They taste like shrimp that have gone a day or so past their prime before cooking. I get the feeling that someone at the factory said "No one will notice anyway because the sauce is so strong - they'll be so busy chewing on the tortillas that they won't notice how bad the shrimps are."

No. It is very noticeable. More than noticeable enough to make these simply inedible. I actually saved the package and will be asking for our money back when we make the next trip. We have tasted some bad frozen tacos in the ten years we've been doing frozen food reviews here at Dr. Gourmet, and this is by far the worst. It is also one of the worst frozen meals to ever grace my poor unsuspecting microwave. (By the way, the corn tortillas were so tough it sounded like they were going to break the garbage disposal when I put the 2 1/2 inedible tacos down the sink to get rid of them.)

There is no real reason to even mention the nutrition facts, but here they are anyway: 340 calories, 620mg sodium, 6g fiber. Leave these in the freezer case. 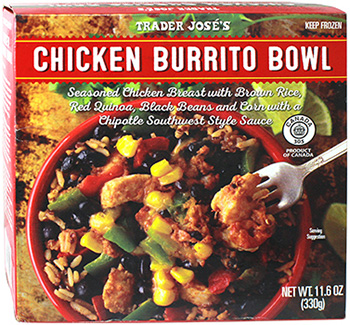 Maybe in an effort to distance themselves from their own brand, the Chicken Burrito Bowl (380 calories, 560mg sodium, 10g fiber) is labelled "Trader Jose's." (Or maybe they're just trying to be cute.) It is pretty difficult to mess up a frozen burrito bowl: put some rice and beans and corn in a bowl, top it with veggies and sauce, add a bit of chicken, seafood, or meat, and freeze. With that in mind, we went into the tasting expecting a better outcome than with their shrimp tacos. Sadly, those expectations were not met.

Almost everything is wrong with this dish. The flavor of the sauce is overwhelmingly of ground cumin, the chicken is tough and sinewy, and both the black beans and rice are undercooked and have a grainy texture that is made worse by the quinoa also being underdone. There is, quite simply, no flavor of chipotle. None. No spice. No smoke. The only redeeming value is that the corn is pretty good.

In fairness, there is the redeeming value that the gristly chicken doesn't taste like it is a couple of days past its prime and the remaining contents of the bowl didn't sound like it was going to break my garbage disposal (because the garbage disposal is where most of this meal went as well).

I still don't understand Trader Joe's. Mediocre fresh ingredients and mostly terrible frozen foods (so far). I guess we will keep trying. I am assured that their cereals are great, but I draw the line at reviewing cereals.