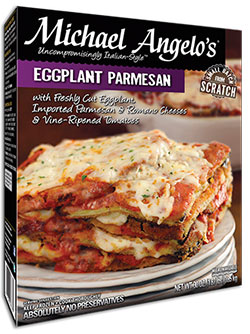 We've reviewed almost 700 different items over the years here at Dr. Gourmet, including ingredients (chicken broth, for example), frozen meals, and desserts. Generally the companies whose frozen meals we review have a mixed track record with us: it's pretty rare for all - or even nearly all - of their reviews to be positive.

One of these companies is Michael Angelo's. Their Natural line tends to be lower in sodium than their Signature meals, but we've reviewed items from both. Back in 2008 a reader recommended that we try their Eggplant Parmesan, and at the time the Eggplant Parmesan in their Signature line had 1,000 milligrams of sodium per serving. As you can imagine, we passed it up and chose to review the Eggplant Medallions from their Natural line (it was pretty good - just not up to the quality of the other Michael Angelo's meals we'd tried). Because of their positive track record, we keep an eye out for their meals, hoping to come across something we haven't yet reviewed.

Recently my wife picked up their Eggplant Parmesan again and saw that the sodium was now 760 milligrams - still pretty darn high, but with 430 calories (making this a dinner meal, in my view) it's not unreasonable. As my wife pointed out, if this were 2 servings, it would be 215 calories and 380 milligrams of sodium per serving - sounds much better, doesn't it? I saw her point and brought it to our panel for a tasting.

This is classic Eggplant Parmesan - thin rounds of eggplant that are lightly breaded and layered with pasta sauce, then topped with parmigiano. The eggplant is cooked enough to have that creamy mouthfeel you want without being mushy - indeed, the meal retains a fair amount of character and the eggplant some real crunch. The pasta sauce has a mellow tomato flavor enhanced with a touch of basil, and there's enough cheese to add flavor without going overboard. All in all, something to keep in the freezer to serve for dinner when you're just too tired or time-crunched to cook. Just add a side salad and you're good to go! 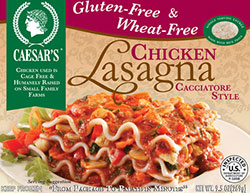 Caesar's Pasta Specialties is one of the very few companies who have a uniformly positive track record (and in gluten-free pasta, which is even more impressive), although they only have a few frozen single-serving entrees. With their Chicken Lasagna Cacciatore we were all set for another great review.

As with their other meals, this has great numbers: 390 calories with only 290 milligrams of sodium and 4 grams of fiber. Unfortunately that's all it's got: this was oddly... bland. While the rice noodles stand up well to cooking, the filling, which includes chicken, red and green bell peppers, carrots, and spinach, tastes like nothing so much as "the way raw chicken smells," as one taster put it. All you can really taste is the chicken and maybe the green bell pepper. Another taster added, "it smells kind of like dog food." Okay, it might not be that bad, but it's definitely not good. Have one of their other lasagnas instead.