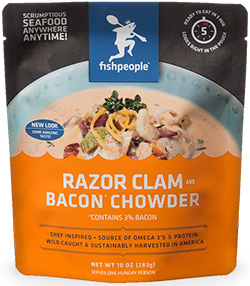 I have repeatedly said that I am not a fan of convenience foods. But people do eat them and our reviews are meant to help folks make better choices - both for their health and especially for their taste buds. One of the most frustrating things is that there are not many seafood dishes available. Those that we have been able to review are spotty and it makes sense. Cooking, freezing and reheating fish or shellfish can be murder on the product.

This is why we were pretty excited about Fishpeople soups that we found on the shelf. Not in the freezer case, mind you, but on the shelf in the soup aisle. This seems incredibly convenient and we have reviewed soups packaged this way previously (with good results). The Fig Foods soups are vegetarian and tasted great, but also have the added benefit of lots of fiber.

The package on the Fishpeople soups was similar - about 300 calories, with 3 to 4 grams fiber and 550 to 600 milligrams of sodium. For about $6.00 that's not a bad lunch, and healthier than most any fast food at the same price.

And they taste a lot better. A LOT better. 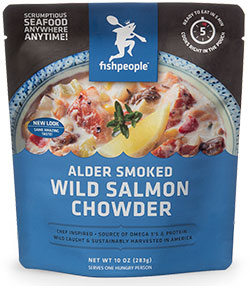 First up was the Razor Clam and Bacon Chowder. Package instructions call for cutting a 1 inch slit in the top of the pouch and microwaving for 1 minute. That works perfectly (I was dubious about the short cooking time).

The flavor is smoky but doesn't have an overpowering bacon flavor. It is very creamy with potatoes that are firm, chunks of clams that are tender and not chewy like rubber bands, and a rich creamy texture. It is a touch on the salty side but not offensively so. The carrots are a bit mushy, but that's actually OK as they are super sweet.

In short, a very good soup.

The Alder Smoked Wild Salmon Chowder is also good, but not as good as the razor clam soup. Same cooking instructions. Same single serving pouch. Same creamy soup but with more of a basic salmon flavor. The "alder smoked" flavor doesn't come through very much, and the soup is saved by the addition of some corn (it could have used more corn and less smoke). The salmon is good although just a bit dry. Given that this was reheated in the microwave, a great effort but not at the top of our Fishpeople list. 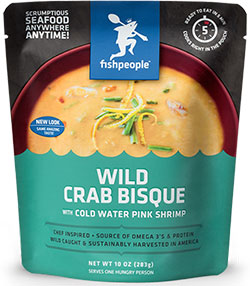 Finally, the Wild Crab Bisque is a little underwhelming. Again, a creamy soup with more of an orange and sherry flavor than I would like. There's much more crab flavor than shrimp, even though both are listed on the package. The cayenne isn't noticeable at all. A far more run-of-the-mill soup that just doesn't compare with the Razor Clam but is still a fairly respectable seafood bisque.

There are a couple of caveats about these soups. First and foremost is that they are treats. While the calories are low, the amount of fat is through the roof - especially saturated fat. When reading the package, one of the first ingredients on most of the packages is cream. There's actually enough fat that this is not a lot different than ice cream. So, not an every day lunch. The second issue is that they are cream soups and those who are lactose intolerant just will not be able to manage Fishpeople soups.

We looked at the Fishpeople Web site, and it appears that some of their meals are much lower in both fat and sodium, so we will be reviewing those products when we can find them. In the mean time, we have to say leave these on the shelf except for special occasions.