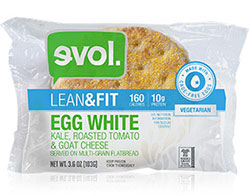 We're continuing our breakfast food binge this week, returning to evol Foods. They've branched out from their breakfast burritos - both of which, the Egg White & Spinach Breakfast Burrito and the Sausage, Egg & Smoked Gouda Breakfast Burrito, were fairly good, into breakfast sandwiches. As we've seen with offerings from evol Foods, however, it seems that when they stray from their core product line, burritos, they don't do quite as well in our reviews. Their macaroni and cheese bowls, such as the Chipotle Chicken Mac & Cheese Bowl and the Truffle Parmesan Mac & Cheese Bowl, were terrible. Small portions, calorically dense, and too little flavor. Why branch out to mac and cheese when your burritos are so good?

With today's products we'll find out if they've stepped out of their competency zone again. We started with the Egg White, Kale, Roasted Tomato & Goat Cheese sandwich, which (like all these sandwiches) is billed as being served on "multi-grain flatbread."

These are sold singly in plastic packages. Simply open one end of the package and microwave for 1:45, then allow to sit for one minute. After decanting the sandwich onto a plate we were a little dubious: the flatbread seems a little too soft for picking up. Worse yet, after allowing the sandwich to cool a minute or so the top piece of flatbread was quite dry to the touch, but the flatbread on the bottom was actually rather... "slimy" is the word one reviewer used. Even so, the first bite of this sandwich is more like biting into a stale and slightly softened thick cracker than anything breadlike.

The filling of this sandwich is a half-inch-thick egg white patty topped with a very thin layer of diced kale and a smear of goat cheese dotted with a few bits of diced tomato. The flavor is fairly good - when you can taste it through the salt. The entire sandwich has only 160 calories, but a whopping 400 milligrams of sodium. That's 2 1/2 milligrams of sodium for every calorie! (Compare this to lunch or dinner meals we've reviewed that have the same amount of sodium and twice as many calories: their ratio of sodium to calories is 0.8 milligrams of sodium to each calorie. The lower the sodium amount per calorie, the better.) 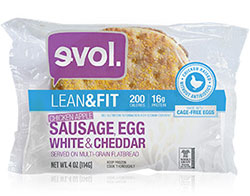 The Sausage, Egg White & Cheddar sandwich is not much better in the sodium-to-calorie ratio: its 200 calories and 490 milligrams of sodium yields a ratio of 2.45 to 1. It doesn't taste as salty as the Egg White and Kale version, however. The same flatbread (complete with "sliminess") and what appears to be the same egg white disc is topped with a round of Chicken Apple sausage and white cheddar cheese. The sausage is oddly bland, with a strong flavor of sage and apple and lacking that umami flavor of most sausages. (One panelist mentioned a slight chemical aftertaste.) The chewy flatbread actually gets harder and chewier by the moment, and once the sausage is cool enough to eat, the meal is actually being served on thick rounds of wheat-flavored cardboard. Salt, calories, and salt ratio aside, you can do much better with evol Foods' breakfast burritos, but best is still to make your own.