Tomato sauce should be easy, but a lot of food manufacturers just can't get it right. We've reviewed tomato sauces pretty extensively on the Dr. Gourmet website, as well as a number of other convenience foods that use it as a central ingredient. It's a mixed bag: some OK and others awful. There are a few that are actually good.

This week's offerings to you are from two of the most popular frozen food brands, Weight Watchers and Lean Cuisine. They do fit the bill for being a mixed bag.... 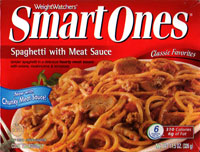 The Weight Watchers Spaghetti with Meat Sauce (Spaghetti Bolognese) is a pretty darn good product. The meal comes packed in its little black plastic tray with the pasta on one end and the sauce on the other. Opening a vent in the plastic at the sauce end and cooking according to the instructions yields just what you would expect - spaghetti and sauce. The flavor and aroma are pretty good. Not at all sweet like many prepared sauces. This is made with a bit of meat and some mushrooms. The balance of herbs is fairly good and this was not overly salty. The pasta is thicker, like a spaghetti should be, and did not become gummy with cooking.

This is not anywhere near as good as Michael Angelo's products and there are a number of dubious sounding ingredients, but it is about half the price. For those without access to Michael Angelo's this is a good substitute for sure and it's only 310 calories. Not bad in the salt department either with 580 mg (they could easily have cut this just a bit without having an effect on the flavor). 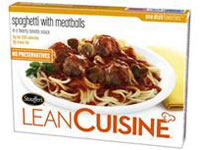 The Lean Cuisine Spaghetti with Meatballs was a great disappointment. It is always amazing to me that a company like Stouffer's can have some good products and some that are really awful. You have to wonder if they actually taste these.

This offering is similar to the Weight Watchers with pasta on one end and sauce (with meatballs) at the other end of the tray. Cooked and mixed, the spaghetti breaks up and there's not a lot of sauce. The texture of the meatballs is doughy as if there's more bread than meat in them. The sauce is a little too sweet and the pasta too gummy. There are fewer calories than the Weight Watchers version, but the portion of the pasta appears smaller. All in all a poor contribution from the folks at Lean Cuisine.