How is using sea salt the same as using less salt?

How can Campbell's Soups claim that they have used sea salt and have, therefore, less salt? That has really been bothering me. 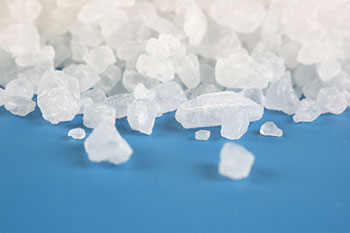 There are two ways to look at the issue of sea salt. First, some science for review.

Now, think of a bag of very small pebbles that are smooth, round and about 1/8 inch in size. Compare this to gravel, maybe from your driveway or a construction site, whose rocks are 1 to 2 inches in size and are more irregularly shaped. If you fill one bucket with the pebbles and another bucket with the gravel, there will be a lot of space between the irregular gravel chunks, and the bucket containing the gravel will weigh less than the bucket containing pebbles, because of the extra air in between the rocks.

This is what happens with table salt vs. sea salt. There's simply more air in a teaspoon of the sea salt and therefore there's less sodium chloride (read that less sodium).

Campbell's can use sea salt and add the same volume of salt and there will be less sodium in their soup. But they could also use table salt and simply use less of it. Either way, less sodium.

So why use sea salt at all? Chefs feel that the impurities that are found in sea salt add to the flavor, and it's certainly true that the evaporation of sea water leaves behind not only the salt but also some of the flavors (other minerals, etc.) from the ocean that the salt is harvested from.

More directly, sprinkling sea salt on food adds larger, irregular shaped salt crystals to the outside of the food, and these will hit your tongue and activate the salt taste buds more than the fine crystals that could be lost in the cooking process.

Does the sea salt add more salt flavor to Campbell's soups? Not likely, since the salt dissolves in the soup. Does it add less sodium? Well, they report less sodium so there's less salt. Does it add other flavors to the soup that you'll be able to recognize? Not likely, since Campbell's is going to use the least expensive, most generic sea salt - not the more expensive salts that chefs will use to add flavors to their dishes. Is this a scam by Campbell's? Sort of.

All that said, if you like the soup and it fits with your diet, buy it and eat it.