Will a low-carb diet help with lymphedema?

I am on a mailing list with other folks with secondary and primary lymphedema. We have reports from some people that low carb diets make them feel better with their disease. As you probably know, affected limbs go up and down, and with massage and wrapping we try to minimize the swelling as much as we can.

Can you think of any reason our unscientific but widely held view on carbs might have some science behind it? 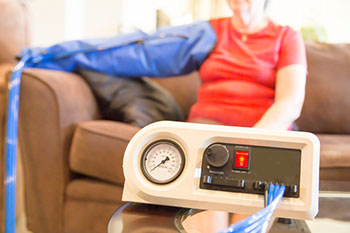 This is a particularly vexing question, as is the problem of lymphedema itself. I have had a few patients with both primary and secondary disease, and like your question, it is a difficult problem. I have not, however, been able to find any research that proves a low carbohydrate diet is helpful.

It may be that because some lymphedema is a problem with the difference in "oncotic" pressure between the veins and tissues, that some have come to this conclusion. Because the oncotic pressure is controlled mostly by proteins, one might think that eating a diet with less carbohydrates (thus relatively more proteins) would help.

Unfortunately the body doesn't really process the proteins or carbohydrates in this way.

The anecdotes that sometimes add up to accepted practice (and often go on to be proven scientifically) are sometimes the result of the initial idea (in this case that carbohydrates cause lymphedema to worsen). But it could also be that a another mechanism is responsible. For instance, a change in diet for some means a loss of weight (which is very important for some folks with lymphedema). Low carbohydrate diets (like the Atkins diet) are controversial, but may actually be helpful in some people. This could be one instance where the risk of eating lower carbs is outweighed by the benefit of weight loss and improved lymphedema.

Likewise, there could be other factors that could go along with eating less carbs. While for the majority of people with lymphedema eating less salt (sodium) is not helpful, some with the disease are very sensitive to salt. It may be that the lower carb diet is also lower in sodium.

The key is to ask your physician for a referral to a dietitian. Discuss trying a lower carb diet and see if it works for you.

Thanks for a very interesting question,