Is corn not as good for you as other whole grains or vegetables?

I'm not sure where it came from, but I have the idea that corn is to other whole grains somewhat as potatoes are to other vegetables, i.e., not as healthy. How good is corn for you? As a dried grain vs fresh? Is cornmeal normally nixtamaled? 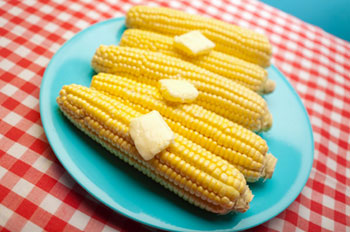 This is a great question. Corn is a cereal grain much like oats and wheat. There are similarities between all grains and corn is as good for you as the rest. The question of whether it is healthier is one of very slight degrees. For instance an ear of corn has about 75 calories and 2 grams of fiber. This serving is about the same as 1/4 cup of uncooked oatmeal (which also has about 2 grams of fiber). Getting to the finished servings of each of these requires markedly different processing. The corn you simply have to shuck while the oats have been processed by toasting, hulling, cleaning, steaming and rolling flat.

When processed, corn can be made into so many other products. This is because of the versatility of many of the basic ingredients. Cornmeal is nixtamaled. This is a process developed by the Aztec and Mayan cultures to preserve and fortify their corn. It involves soaking the corn kernels in an alkaline solution, cooking, steeping, washing and then grinding. The result is cornmeal (yellow) or grits (white). 1/4 cup of corn meal (39.75 grams) contains 147 calories, 1.6 grams of fiber and just under a gram of fat. Interestingly, the same 39.75 grams of rolled oats is also 147 calories but has almost three grams of fat and 4 grams of fiber. It is this difference in nutrient content that has led to the idea that corn is not as nutritious as other cereal grains. It is, however, just different nutrients.

The problem comes in trying to compare apples with oranges (or in this case wheat or oats with corn). They are all healthy, they are all good for you and they are better for you in the most natural state possible for consumption. Fresh corn is probably "better" for you than corn meal and wheat berries are probably "better" for you than white flour. But that's splitting hairs. The key is to eat a wide variety of foods and to try to make them as fresh as possible. So having corn on the cob one night, oatmeal for breakfast the next day and then a whole wheat roll for lunch you'll get a lot of variety, higher fiber and be eating healthy.

So where does that leave the lowly potato? Not really all that lowly in my opinion. First off, technically the grains mentioned above are seeds of their respective plants and are considered fruits and not vegetables while the potato is a true vegetable. That said, potatoes are pretty nutritious. A 6 ounce potato comes in at 131 calories and 4 grams of fiber. There's almost no fat though. As a vegetable they are fairly calorie dense. The same 170 grams of broccoli has a little more fiber but only 58 calories. Those potatoes are nutritious but not in the same realm as the broccoli which has tons of vitamins that the potato, growing underground, doesn't develop.

I don't see any one of these ingredients being healthier than another. The key is that they all have their strengths as far as nutrition. Many of those strengths are diminished in the processing (you're better off with a baked potato than potato chips). If you're filling your menus with corn on the cob, oatmeal, whole wheat bread, polenta, baked potatoes, steamed broccoli, roasted beets, apples, oranges and grits instead of highly processed food, you're living well.