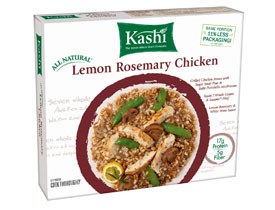 I must admit that I do have a little bit of dread every time I approach our testing of frozen meals here at Dr. Gourmet. I think that it’s a bit like the movie critic who has to sit through a whole lot of bad films to find something even good (let alone a film that’s great). Like a good director, Kashi is something that I have at least come to feel less apprehension about when I peel that plastic film back off the top of the dish in preparation for the microwave.

Their Lemon Rosemary Chicken is pretty good. There’s an herbaceous rosemary flavor with just a hint of lemon. The light sauce is coupled with mushrooms (that taste like mushrooms) and snap peas. The dish is served over the Kashi® “Seven Whole Grains & Sesame® Pilaf.” While that’s a lot of trademarks for a simple side dish it does offer some texture to what might be a pretty plain meal otherwise because the peas, mushrooms and chicken have been frozen and just don’t have the consistency of fresh. 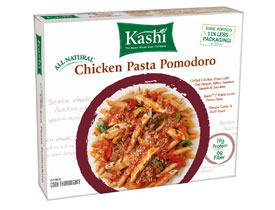 Even though it is Kashi I was not prepared to like the Chicken Pasta Pomodoro. Most frozen dinners with tomato sauce taste like a bad pizza parlor but not the Kashi. All in all this is a pretty respectable entry. Whole wheat penne pasta is topped with a light tomato sauce. The dried oregano and basil flavors are not too strong in the sauce as with most frozen meals.

The chicken has some texture to it as do the veggies including zucchini, yellow squash and red peppers. Even so the Lemon Rosemary Chicken fares better with more flavor and texture to commend it. The other interesting feature of their food is that there’s no funny, plastic aftertaste that comes with most TV dinners.