About three weeks ago I reviewed two pizzas from Walmart's Great Value line of frozen foods. They were terrible, with thick, doughy crusts, although their pizza sauce was pretty good. But as I said at the time, few frozen pizzas are worth eating, regardless of manufacturer. Today we're returning to Walmart with two pasta dishes not unlike frozen meals we've reviewed from other brands: a Cheese Ravioli and a Three Cheese Marinara.

I chose the ravioli with some misgivings. We haven't had too terribly much luck with frozen ravioli in the past - the ravioli in Healthy Choice's Lobster Cheese Ravioli had hardly any filling and the sauce was way too sweet. Other ravioli have good fillings but end up dried out by the cooking process and become tough (Healthy Choice's Pumpkin Squash Ravioli and Ravioli Florentine Marinara). Yet good ravioli, with a balance between filling, sauce and texture, can be done, as Lean Cuisine did with their Butternut Squash Ravioli.

Walmart's Cheese Ravioli has a promising appearance - they're good-sized (about 1 1/2 inch square) ravioli with real plumpness. Right out of the microwave the sauce appears thin, but as you allow the meal to rest for the recommended two minutes, the sauce thickens nicely to the described "chunky tomato sauce." This is a bright, tomatoey sauce that's not too sweet and has a fair amount of oregano and parsley to add that herbaceous aroma. Even better, the filling in these little pillows is a generous amount of ricotta and parmesan - a real mouthful.

The seven ravioli you receive in this meal have 220 calories, with 340 milligrams of sodium (along with some potassium chloride as a salt substitute) but only 3 grams of fiber. The pasta these ravioli are made of is the standard white pasta, which makes them a little softer than I'd like - making them out of whole wheat pasta would give them more bite as well as more fiber. All in all, however, a very respectable plate of ravioli. Add a little side salad or a piece of fruit and you have a very nice meal. 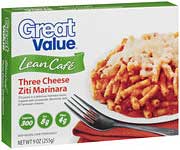 After such a good plate of ravioli I was sure that our second dish would be disappointing. Surprise! The Three Cheese Marinara is a generous portion of ziti (smooth little tubes), with what first appeared to be not enough sauce. I thought for sure that this would result in dried-out pasta, but after mixing in the sauce midway through cooking I could see that the amount of sauce in this dish is just right - enough to coat the ziti without turning it into a soupy mess. There was also restraint shown in the amount of cheese: there's mozzarella, parmesan and Monterey jack cheese in the right amount to add flavor without ending up with big glops of stringy cheese.

The sauce itself is a nice marinara: a little sweeter than the sauce in the ravioli but with chunks of onion and hints of oregano. (If I were to eat this at home I might sprinkle a little dried oregano over the top and mix it in to give it a little more bite, but it's OK as is.) As expected the white pasta is overcooked and would benefit from being whole wheat, but as it is this is something your kids will love - thick and cheesy. With 300 calories, 580 milligrams of sodium (unsurprising - the cheeses are fairly salty) and 4 grams of fiber, this is another good value for your freezer. Again, add a side salad or piece of fruit to round it out.

I must admit to being surprised. I looked at the additional meals available on the Walmart web site, and although I didn't see many other single serving frozen meals available that come under our upper limit of about 650 milligrams of sodium, we'll certainly be going back to find what options there are.