Back in October we discovered that Red's All Natural, who makes nearly uniformly excellent burritos, had branched out into entree bowls. Our local Winn-Dixie had the Chicken Cilantro & Lime entree bowl on the shelf, but were out of the steak version. Our panel loved the chicken entree despite its mushy white rice, so we kept an eye out for the steak. Today we have the steak entree, along with what is almost certainly the burrito version of the Chicken entree bowl.

Burritos are tricky to cook properly without ending up with splits down the side or frozen bits in the middle. Fortunately, the instructions for the Chicken Cilantro & Lime burrito (270 calories, 470mg sodium, 2g fiber) helpfully specified a 1000-watt microwave oven for cooking. The microwave in the Dr. Gourmet test kitchen is 1200-watt, so we cooked to the minimum time - 45 seconds on each side - and for cooking placed the burrito in a plastic dish loosely fitted with a lid, per the instructions.

In this case the burrito was cooked just through, but it still split down the side, and because of the loose-fitting lid the tortilla wrap was steamed and was first slimy, then tough.

The splitting didn't cause a huge mess, however - one could still pick it up and eat it rather than using a knife and fork. The tortilla is a thicker, authentic-tasting flour tortilla that would be tender if it were not basically steamed and then cooled. The filling, on the other hand, is (according to the panel) as good as the bowl of the same name: the white rice cooked with lime and cilantro is still a little mushy, while the diced chicken is tender and flavorful. The chicken mixes with white cheddar cheese to push the savory quotient quite high, and the tomatillos and lime add sharpness. Kernels of corn and a few black beans provide sweet and savory punctuation respectively.

The only drawback as far as the panel could see was that they wished there were more of the filling - but that's easily resolved by purchasing the entree version as in our previous review. If you're looking for a tasty, savory burrito, this is a good choice. 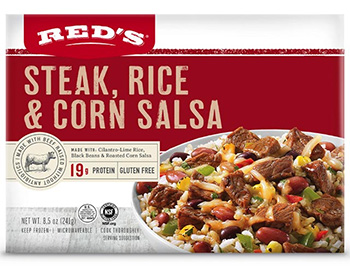 Red's All Natural Steak, Rice & Corn Salsa entree bowl (350 calories, 680mg sodium, 4g fiber) might be on the higher side of our sodium limit, but it has significantly more fiber than many freezer meals, so we chose to give it a pass.

This has the same cilantro-lime rice as the chicken version - also a bit overcooked, but still delicious as far as the panel was concerned - with 1/2-inch dice of what might well be flank steak ("it has that 'flank steak' chewiness but also that deep beef flavor" said a panelist) in a sauce with a definite lime and oregano note.

The bowl is dotted with corn that appears to be grilled as well as pinto beans and black beans, all of which lend a sweet or savory note to the dish, then it's finished off with the creaminess of just a touch of pepper-jack cheese.

The panel looked at all of the offerings from Red's All Natural and concluded that, for the money, you're probably better off choosing the entree bowls of the same flavors rather than the burritos. "Either way, they're good," they said. "You just get more [volume] with the bowls."