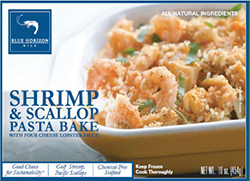 It's been a couple of years since we first encountered Blue Horizon Wild in our never-ending quest for convenience meals containing fish or shellfish. The first items we tried, back in 2010, their "Bites" ranged from not bad to pretty okay (while too salty), and although they're marketed as hors d'oeuvres, they'd make a decent lunch or even dinner.

Later we discovered their Crab Cakes and Crab Bites, with another mixed bag of good crab cakes and awful crab bites. That's the problem with seafood convenience meals - they're just so easy to get wrong. Really, really wrong. 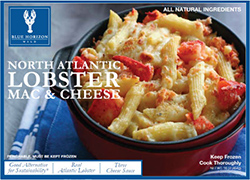 We spotted these at our local Fresh Market and were a little surprised to see that Blue Horizon Wild had gone into the frozen meal market. We'd thought that we had exhausted their offerings. Granted, in light of our previous reviews we didn't expect much, and at $5.99 and $6.99 per serving (yes, really), the bar was set pretty darn high.

First up was the Shrimp & Scallop Pasta Bake. Usually the order of tasting depends mostly on what comes out of the freezer first, but today one panelist insisted that we try this first because they "love Lobster Mac & Cheese" and wanted to end the session on a high note. Fair enough. The problem, however, is that this is good. Really good. Maybe not $5.99 good, but then you'd spend at least that much at Subway (yuck).

Microwaving shrimp is a tricky business all by itself, but scallops? Our panelists said, "I never would have thought that these little guys were microwaved." The scallops in this dish are more along the lines of bay scallops than sea scallops, in terms of size, but they're still full of flavor and far more tender than they have any right to be coming out of a microwave. Similarly, the shrimp in this dish are fairly small (averaging right about quarter-sized), but they, too, are neither overcooked or freezer burned. The only down side we can see is that there could be more of them.

The shellfish is presented in a dish of pasta shells that are surprisingly al dente for plain pasta, and the sauce has a moderately thick - but not gummy - consistency, with a light and creamy cheesy flavor. There's a crumb topping with this dish that, if it were cooked in the oven, might add some crunch, but honestly... we looked for something to dislike and just couldn't find much to complain about except that they could have used whole wheat pasta for more fiber. Even the numbers are pretty good at 370 calories, only 520 milligrams of sodium, and 2 grams of fiber.

With that behind us we had even higher expectations for the Lobster Mac & Cheese. This was a little harder to get into, however - the first thing we noticed was a very strong fishy scent that is likely to be off-putting to some. Unlike the Shrimp & Scallop Bake, the vast majority of the lobster in this dish is flaked, not whole: there are perhaps 4 or 5 actual chunks of lobster.

Once the flakes are mixed into the pasta and sauce, however, it works pretty well, giving the dish a strong lobster flavor (if not a lot of lobster bites). The panelists felt that this contained basically the same cheese sauce as in the Shrimp & Scallop Bake, with the addition of enough chipotle pepper spice to leave the tasters with "a lingering zing." The pasta, this time penne, was not quite as al dente as the shells in the other dish, but overall not too terribly overdone. Overall? A mixed verdict, with some saying it wasn't worth the price of admission, while others loved the stronger flavors. We'll give this one a thumbs down for the price, but those who really like Lobster Mac & Cheese may love it. Get your shellfish fix from the Shrimp & Scallop Pasta Bake instead.