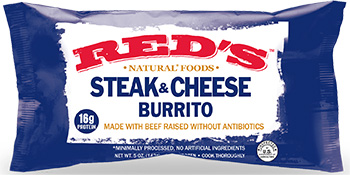 When I'm in areas of New Orleans I don't visit often, I make a point of visiting their grocery stores. One of the reasons is that I like to be aware of what fresh foods are available to my patients (I do see patients from all over the city), but for Dr. Gourmet I like to check the frozen foods aisles to see if there's something that's not carried in our usual grocery stores, closer to Dr. Gourmet world headquarters. This paid off today; I was pleased to run across burritos from Red's Natural Foods. They'd disappeared from the grocery stores near Dr. Gourmet headquarters, and our most recent review of any of their varieties was in 2013, with the previous review in 2012.

We started our tasting with the Steak & Cheese Burrito. We were a little concerned about this from the start as it has 650 milligrams of sodium for a burrito that's only 310 calories, with 2 grams of fiber. (Neither of these burritos are gluten-free; our tasting panel did the actual tasting today.) Still, we gave all of their burritos a thumbs up in the past, so our expectations were high.

As usual, we chose to microwave the burrito despite the oven method being the "preferred instructions." Most people simply are not going to put their little burrito in an oven for 15 minutes - in addition to microwaving it for a minute to thaw it, as these burritos direct. Note also that the all-microwave instructions call for placing the burrito on a microwave-safe plate and covering it with a lid or another microwave-safe plate, then cooking it for one minute, turning the burrito over, and cooking it for another minute. We suspected that this might not be a good idea, and our fears were borne out when after one minute the steak burrito was swimming in a little puddle of water - turning it over and cooking it for another minute would have resulted in a pile of mush. And this was after choosing not to cover the burrito: keeping it covered would have increased the amount of liquid left on the plate. We mopped up the liquid, flipped it over, cooked it for another minute, and cut into the burrito.

The first reaction from the panel was, "It's so small." This just doesn't seem like much of a meal at all at about 4 inches by 1 1/2 inches by 1 inch, and worse yet, this seems to suffer from the problem nearly endemic to frozen burritos: it's mostly tortilla. (Funny, I don't recall this being a "feature" of Red's burritos before.) The wheat tortilla comes out slimy from the excess liquid, thus tough, and splits down the length of the burrito, defeating the hand-held purpose of burritos. What you can see in the filling is medium-sized chunks of beef, a few pinto beans, a little brown rice, some red bell peppers, and a few kernels of corn. The beef is thick and more chewy than we'd like, though somewhat flavorful, and the whole could be considered mildly spicy, with just a touch of chili powder and cumin. The panel felt that overall, they'd give this a thumbs up for being inoffensive if it weren't so high in sodium. Thumbs definitely down on this one.

Many of the elements of the steak burrito are identical in the Chicken & Cheese Burrito: same tortilla (though for some reason this did not suffer from the extraneous liquid problem), same chewy texture of the tortilla, same brown rice, pinto beans, and bell peppers, same poor tortilla-to-filling ratio (290 calories, 500 milligrams sodium, 2 grams fiber). The panel couldn't quite explain why, but they felt that the chicken burrito had "more flavor, somehow," saying that "maybe it's that we can taste the beans?" It's true that in my experience too much salt can obscure flavors. Still, the chicken is just as chewy (although not dry, panelists hastened to add) as the steak, as is the brown rice, which was nearly unnoticeable in the Steak & Cheese Burrito.

The overall verdict: the Chicken & Cheese Burrito was termed, "Okay if you can't find any Sweet Earth Natural Foods burritos. And you'd think there'd be more fiber in the burritos if they have brown rice in them." From the mouths of (medical school) babes....