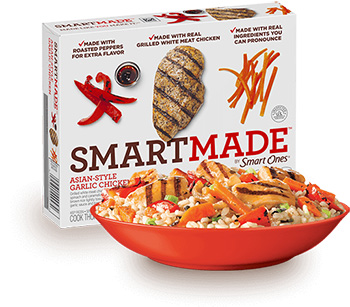 We're back this week with two reviews from the newest arm of what I think of as the big three of frozen meals (those "big three" being Lean Cuisine, Weight Watchers [aka Smart Ones] and Healthy Choice.)

Regardless of pronounceability, we started this week's tasting with the Asian-Style Garlic Chicken. As one panelist pointed out, that may have been a mistake: while cooking this has a fairly assertive garlic scent that might have affected the tasting of other foods. That's possible, but likely not a huge problem when it comes to frozen food tasting here at the Dr. Gourmet kitchen. But it might pose an issue at your office: do you really want to make the area surrounding the location of the microwave smell like garlic? Perhaps not. (Perhaps you don't anyhow: read on.)

Our first look at the meal is encouraging: big pieces of what looks like real, unprocessed chicken (described by our holiday-minded team as "the size of two Hershey's Kisses© put together") are accompanied by fairly substantial chunks of what are described as "caramelized onions" but are in fact termed "caramelized" only as a courtesy to the browned bits on their edges. They have a sweet/savory onion flavor and a bit of texture, even so.

To accompany the (rather dry) chicken and brown rice (also not overcooked more than one might expect from frozen food), there's a comparatively substantial amount of spinach. Keep in mind that this dish has 220 calories, 570 milligrams of sodium, and 4 grams of fiber, so "substantial" in this case means perhaps a little less than 1 Tablespoon, cooked. The red bell pepper slices, few and far between, give a bittersweet counterpoint to the faintly gingery note of the garlic sauce, but the overall verdict on this dish, given the dry chicken, the soft vegetables, and the "just OK" sauce, was "it's not bad."

I guess we call that "damned with faint praise." Certainly there are better chicken dishes that are more widely available, especially at the about $3.50 we spent on these dishes. 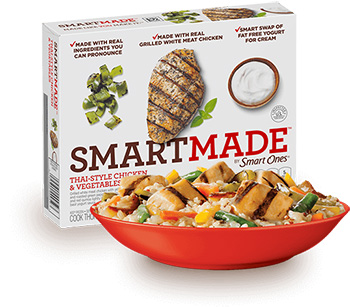 The panel was encouraged to see actual Thai basil listed in the ingredients for the Thai-Style Chicken & Vegetables meal, but the team noted that there wasn't much of a basil scent to the dish as it was cooking.

Even so, we were favorably inclined from the start: "I love the quinoa and brown rice mix," said a panelist, noting the high fiber and texture of the dish. There's just a bit of coconut flavor to the yogurt-based creamy sauce that leaves a tingle of spice on the tongue, and the panel enjoyed that, too.

Unfortunately, they couldn't enjoy the chicken: the ingredient lists on both meals we tested today were identical, and that means that not only were the outcomes the same - dry chicken - the Thai-Style Chicken was even more dry than that of the Asian-Style Chicken. Further, the green beans and carrots included in the dish, which made it rather colorful and appealing, were overcooked to a "less-than-pleasant" degree.

"It's too bad," said a panelist, "the sauce is good." It was described as "creamy," and as having "not only a coconut note but also a note of Thai Basil" with a bit of red pepper to leave "that pleasant tingle." The overly dry chicken just isn't tolerable, however. Overall, leave both on the shelf and choose something a bit more rewarding.