Grainful is another brand we discovered through our local Winn-Dixie. I'd never really thought of Winn-Dixie as being a source of innovative frozen meals, but while Whole Foods Market continues to sell Amy's, Annie's, evol, Sweet Earth, and Saffron Road, Winn-Dixie has branched out to bowls from Red's All Natural, souffles from Garden Lites, meals from CedarLane as well as Luvo, and (like Whole Foods) Saffron Road. Indeed, we first spotted meals from Frontera Foods at our local Rouse's, and only thereafter at Whole Foods Market. This is not to say that any of the three stores are better, but it demonstrates that healthier frozen meals are not the exclusive province of what we think of as the higher-end grocery stores.

That said, the meals we review today were $4.99 each, which is not even close to cheap in terms of frozen meals. Further, for the same price per serving you could likely create a dish that served easily twice as many people.

The two meals available from Grainful at our local Winn-Dixie were the Vegetarian Chili and the Tuscan Bean & Kale, just two of a total of 8 frozen meals that Grainful produces, 6 of which all meet our sodium criteria. All of those meals are at 530 milligrams of sodium or less - and some significantly less.

Another panelist likened the dish to Wendy's Chili, and while it's been a while since I've had Wendy's chili, I can certainly attest that this would make a fantastic dinner atop a baked potato. The kidney and black beans are firm and there's there just enough cheese and corn to lend a bit of sweetness among the diced tomatoes. In short: "A good, decent bowl of chili," said the panel. A frozen meal could do far, far worse. 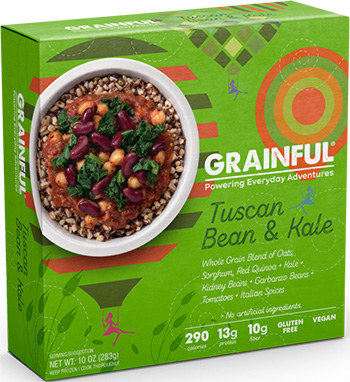 The Tuscan Bean & Kale has more sodium, but also more fiber: 290 calories, 490 milligrams of sodium, and an impressive 10 grams of fiber. This dish includes not only kidney beans and garbanzo beans but also (gluten-free) oat groats and red quinoa.

Initial reviews noted that the meal "smells strongly of oregano," which to some of the panel said "a good pizza sauce" and to others said "cafeteria pizza." This isn't necessarily bad: other panelists felt the strong scent of oregano said "Tuscan" more than "cheap pizza."

At this point the reviews split more fully in two: one side of the panel critiqued the dish on the basis of what was present in the dish, concluding that the "firm and tasty" kidney and garbanzo beans added important ("and satisfying") texture, while wishing there were more kale in the bowl for its savory bitterness to balance out the whole. On the other hand, there were those who thought that the kidney beans "just don't belong" in a Tuscan dish and that the creators of the dish would have been better off with white beans exclusively.

It's actually a good sign when the panel critiques the choice of ingredients in terms of the subtle differences in flavor profiles rather than critiquing the amount of sodium in the dish overall or the overall flavor. It's a question of the chef's intent - what where they trying to do? - rather than their execution (what ended up on the plate). When you're critiquing intent, that (usually) means that execution wasn't the problem: a subtle difference, but an important one in cooking, and certainly not one we are accustomed to considering in terms of frozen meals.

One thing to bear in mind: the recommended retail price for Grainful individual meals is $4.99 per meal. If you purchase your meals directly from Grainful, however, they are only sold in packs of 5 for $41.63: that's $8.32 each. Their store advertises free shipping: I can only conclude that the $16.68 difference between the retail price of 5 meals (5 times $4.99 is $24.95) and the 5-pack price of $41.63 is the cost of shipping. Better to buy yours at your local grocery store in person - or understand that you're actually paying over $15.00 for shipping.