Back in October we reviewed two meals from a local company, Savoie's Foods. We chose to review them because we've seen them in frozen food sections all over New Orleans, and unlike many other local frozen food brands, they contained fairly reasonable amounts of sodium.

It turned out to be one of those days that our tasting panel really lives up to our motto: "We eat it, so you don't have to."™ While the Shrimp Etouffee we reviewed had fairly good etouffee flavor, in effect it was a bowl of rice with a couple of tiny shrimp. No visible Holy Trinity (in New Orleans that means onions, green bell peppers, and celery). Just rice. That's all. The Seafood Penne Pasta was even worse, with a gooey, Monterey-jack-reminiscent cheese sauce with visible floating globules of fat, mushy pasta, and once again, nearly non-existent seafood (one tiny shrimp. One.).

We would simply have written off the entire company after that travesty, but we'd already purchased two other varieties, so today we inflicted them upon our long-suffering tasting panel. Of the two, we chose to review the one that looked the worst first, hoping that the final variety might let us end the tasting session on a high(er) note. 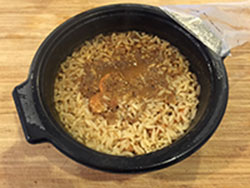 Out came the Creole Shrimp Fricassee. Like the other varieties, this is microwaved for four minutes, stirred, then microwaved another minute and allowed to sit for one minute. At right is what we saw when we took the bowl out of the microwave after four minutes for the initial stirring. Would you want to eat that? 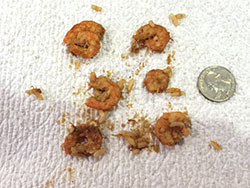 Like the Etouffee, this looks like a bowl of rice with a dab of some sort of sauce and perhaps a few tiny shrimp. "It looks like dog vomit," said one taster. While it doesn't smell like dog vomit, it does smell like rice cooked in chicken broth enhanced with somebody's moldy sweat socks. To be fair, it doesn't taste like it. It tastes like rice cooked overlong in cheap, too-salty, low-quality chicken broth, and you can taste every single one of the 620 milligrams of sodium. Out of scientific curiosity, we dug around and found all of the shrimp in the dish. You can see them in the picture - 7 tiny shrimp all smaller than a quarter (note that the one at upper left is actually two shrimp stuck together somehow). And they are dry as a bone. No. Just no. 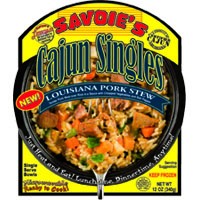 On to the Louisiana Pork Stew. While this was microwaving we all reflected on the marvelous dichotomy between the images on the packages and the reality of the meals. Only this pork stew bears the slightest resemblance to the image on the package. Like the other dishes, this is a bowl of rice, but there's quite a bit of sauce here and a surprising amount of what appear to be diced carrots and squares of what might be potatoes. That's the good news. (It does, however, smell an awful lot like the Fricassee, and there's definitely nothing in it that's green in color.)

It's true that there's a fair amount of carrots here cut in about 1/4-inch dice, but they all look wizened and freezer-burned even though they're cooked to absolute mush. The same goes for the potatoes: tiny bits cooked to hell and gone. There might be a fair amount of pork, as well, cut into slightly larger dice, but this manages to be both stringy and mushy at the same time. In fact, the more we stirred the dish the more the parts dissolved into the whole. Oddly, this tasted overly salty as well, even though the sodium level is much lower at 460 milligrams. Leave this one on the shelf as well. In fact, our tasters remind you that discretion is the better part of valor: your best bet is to leave all of this company's frozen meals alone. Unless you want to be able to say, "I ate it so the Dr. Gourmet tasting panel doesn't have to."