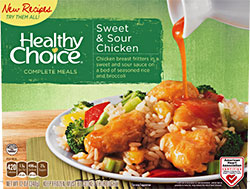 I know, I know. We just reviewed a Sweet and Sour Chicken from Healthy Choice back in August. And it was terrible. Too-sweet sauce, overcooked brown rice, overcooked broccoli, and chicken fritters with a breading with the flavor and texture of wet cardboard.

But the box says "New Recipes" and if there's anywhere that Healthy Choice can stand to improve, it's in their Sweet and Sour Chicken.

The back of the box reads, "Your favorite dish just got better! [Boy, I hope so.] Enjoy this NEW RECIPE made with tender chicken breast and an all new tangy sweet and sour sauce served over a bed of white rice."

So they've switched to brown rice, and this so-called "complete meal" has 420 calories, 490 milligrams of sodium (at least that's reasonable), and 4 grams of fiber. Oddly enough, the "Modern Classics" version we reviewed in August has 390 calories, 460 milligrams of sodium (so slightly more sodium per calorie), and 7 grams of fiber. How is what we're eating today a "complete meal?"

The good news is that this dish does appear to actually contain pineapple and green and red bell peppers. Hmm. It would appear that a "complete meal" contains less broccoli - just a few small broccoli florets and one lone piece of stem less than 3/4 of an inch square are strewn across this dish (after the required stirring). Perhaps the added two bits of pineapple, two chunks of red bell pepper, and one bite of green bell pepper are expected to make up the difference. Either way, it's not anywhere near a true serving of vegetables.

The bad news (as if it could get worse) is that, like the previous version, the white rice soaks up all of the sauce, and this is essentially the same chicken as in the last meals: dry, tough chicken inside, mushy, flavorless breading outside. This is, however, a slightly more creditable sweet and sour sauce: it's much better balanced between sweet and tart/sour. The broccoli is also not overcooked (not that you'll notice; there's so little of it).

Ugh. Just don't. Healthy Choice, my not-very-favorite dish might have gotten better, but not enough to be worth eating. 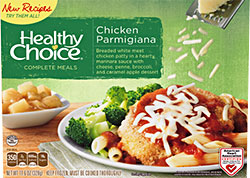 Then we opened the box for our next "New Recipes" meal, their Chicken Parmigiana, and I have to admit to being somewhat confused. I'd assumed from previous experience that Healthy Choice's definition of a "Complete Meal" meant that it included a dessert. That's been the case on every "Complete Meal" we've tested from them. Yet the presence of a "caramel apple dessert" in this dish pointed up the absence of a dessert in the Sweet and Sour Chicken. Huh? Maybe the pineapple chunks count as dessert?

Yet this starts out looking much more promising (at least when it's still frozen). There's a lot more broccoli included in this dish in its own little cubby. The numbers aren't as good, however, with 350 calories (for everything including the dessert!), 600 milligrams of sodium, and 5 grams of fiber.

After the usual cooking, stirring, cooking some more, and allowing to sit, the panelists looked at it and one said, "Breading again."

Another asked, "Where's the 'all NEW hearty marinara sauce'?"

A very good question. The sauce in question is actually a thin scum of sauce dried into the bottom of the cubby containing the breaded chicken and the pasta. There's very little less bland than plain, unadorned pasta, and that's what this essentially is, with the added enjoyment of having a rubbery texture. The broccoli is similarly overcooked to the point of flavorlessness. Already I'd be all for throwing this one away, but in the interest of completeness we cut into the breaded chicken.

The good news here is that the breading has far more flavor than anything else in this dish: it's salty. (Clearly, all the salt in this dish is in the breading.) It also shares the same texture as the breading used in the Sweet and Sour Chicken. (Note to self: proceed with extreme caution when considering testing anything involving breading from Healthy Choice.) A 3/8-inch thick round of moderately dry chicken completes the meal.

Oh, you're wondering about the caramel apple dessert? Why? Yuck.