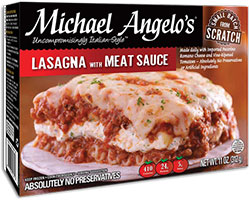 We first encountered Michael Angelo's way back in 2008. Their company has one of the best track records with us: only one negative review in nineteen products. Granted, for sheer numbers that doesn't compare with companies like Lean Cuisine or Healthy Choice, with over 80 and 60 products that we've reviewed, respectively. While a few of Michael Angelo's products might be over our preferred sodium level, we've still gone on record as saying that "if it says Michael Angelo's, you're unlikely to get a bad meal."

When we first discovered Michael Angelo's, they had a number of product lines, including their "Italian Natural Cuisine," a "Signature" line (both single-serving), and then yet another line of family sized meals sold at places like Costco and Sam's Club. The varieties seemed to cross over each other, with a lasagna with meat sauce, for example, appearing in all three lines with different nutrition information. Recently I've seen yet another product line at our local Whole Foods, which has just added to the confusion. The good news is that the company appears to have consolidated their product lines into their Signature (for the general market, in single and multiple-serving sizes), their Made with Organic (the line we've seen at Whole Foods), and the Club lines (multi-serving sizes specifically created for BJ's, Costco, and Sam's Club).

We might have let them continue resting on their laurels if I hadn't spotted their Vegetable Lasagna, emblazoned with "Now with KALE" on the box. With that change in ingredient and at least five years between our review of three of their lasagnas, it seemed a good time to revisit a couple of them.

The panel chose to review the Lasagna with Meat Sauce first. When we last reviewed the lasagnas, we noted that the packages stated that they contained "about 1.5" servings. That problem has been corrected: now the Meat Sauce package states that for the 1 serving in the package, it has 410 calories (less than the previous version), 780 milligrams of sodium (ouch), and 5 grams of fiber. 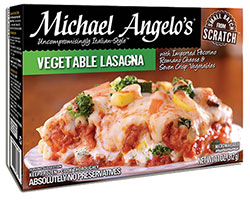 We've been reviewing frozen foods long enough that we know very well that the pretty picture on the package almost never matches what comes out of the microwave. That said, when it says "meat sauce" in a lasagna we expect there to be meat sauce between the layers of pasta. (After all, that's what we did this week with our Lasagna recipe.) That's not, however, what we got with Michael Angelo's lasagna. There are two layers of lasagna noodles separated with a tiny amount of sauce (just enough to keep them from sticking together), a layer of ricotta cheese, another two layers of lasagna noodles, and some more sauce and a little mozzarella cheese on top. Somehow the meat sauce manages to only appear around the outer edges of the lasagna pan.

Don't get us wrong, however. While the meat sauce is a little salty, it's quite honestly one of, if not the best meat sauce we've had in a frozen meal of any kind. It's sweet, tart, herbaceous, and savory all at the same time. Michael Angelo's could make a killing just bottling the sauce. The lasagna, however, just left the panel feeling like it had been fooled, somehow. With the overly-high sodium and the overall feeling of disappointment, we have to give this a thumbs down.

But the Vegetable Lasagna... Now, that's a whole different story. This lasagna has plenty of sauce - easily half again as much sauce as the meat lasagna - and vegetables appearing between every layer of pasta except in the layer of ricotta in the center. The tomato sauce itself has a wonderful roasted garlic scent and a light basil and oregano flavor. The vegetables, - broccoli, cauliflower, zucchini, yellow squash, and mushrooms - lend texture and crunch and keep their bright flavors. This is light-years better than the meat version and we still recommend it highly (380 calories, 700 milligrams sodium, 5 grams fiber).

See all the Michael Angelo's reviews.