At their most basic refried beans are fantastic. Pinto beans are great for you and I love the flavor. The issue is that it takes a bit of time to make them, so of course there are a lot of canned alternatives. Unfortunately, as with so many canned foods there's a lot of added salt. Until now.

I was wandering through the grocery store the other day (as I am wont to do) and there were a couple of cans of Amy's refried beans marked "Light In Sodium." Amy's generally isn't too concerned about the amount of salt in their foods, which is a shame because most of their dishes are too salty. For a company claiming to be healthy they generally overdo the sodium by about half.

They do have some products that are lower in salt (they all have an orange stripe across the top of the package). Most all of them taste far better then their regular salt versions. This is certainly true of their refried beans.

They offer a pinto bean and a black bean version and both are creamy and smooth. While most canned refried beans are low in fat regardless of who makes them, these do have a little but it's in the form of good quality monounsaturated fat. All in all the flavor is fantastic for canned beans. They taste like, well, they taste pretty close to fresh beans (which is what they should be). Neither are too salty. The black bean version has a lovely slight vinegar tang that's a clear winner. 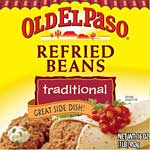 Just for good measure these were tested along side the Old El Paso. Their "Traditional Refried Beans" come in at a whopping 580 mg of sodium in half cup. They tasted canned, sort of like the refried beans you would get at Taco Bell (a sort of plastic flavor).

Best to search out the Amy's or, better yet, make your own.