Two from Kashi and a Revelation

I'd thought that we'd reviewed all of the frozen meal varieties from Kashi. They have a pretty darn good track record here with us, with only four of thirteen products getting a thumbs down. So naturally I was pleased to spot what I thought were two new meals from them: Black Bean Mango and Chicken Florentine. Kashi has changed their packaging recently to reduce the amount of cardboard in their boxes, so I hope I'll be forgiven if I admit to bringing one in for testing that we've done before. You'll be glad I did, however. 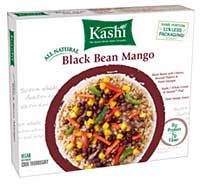 The first one we tested was the Black Bean Mango. While it was cooking, one tester remarked, "It smells like good Mexican food." They're right: this dish has a roasted pepper and cilantro scent while cooking with a hint of sweetness from the mango, just as you might get in a higher end Mexican or Southwestern restaurant. And the dish itself lives up to the promise of its smell: the roasted green and red peppers have great flavor along with some crunch, the roasted onions are also flavorful, and the carrot pieces impart a bit of sweetness. The sauce isn't gooey as you might expect it to be with that sweetness - it's smooth and creamy and the mango hits just the right note to counterpoint the savory black beans. It's served on a bed of Kashi's 7 Whole Grains & Sesame™ pilaf, which is a good, savory and chewy base for this dish that's very satisfying. That pilaf lends this dish a whopping 7 grams (SEVEN! GRAMS!) of fiber to go with its 8 grams of protein, 340 calories and only 430 milligrams of sodium. Another good dish from Kashi! 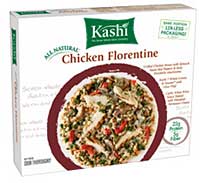 The Chicken Florentine was something else again. This dish smells like good Italian food: garlic and parmesan. I was a little dubious at first because such a strong garlic scent can mean that the garlic overpowers the meal, but this wasn't the case. This meal is a revelation. The chicken, while cut in small bites, is cooked properly (even in our overpowered testing kitchen microwave), the spinach holds up well and lends its savory sweetness, the mushrooms are present and flavorful, and the sauce is simply delicious - well balanced between cream and garlic and parmesan to bring the whole dish together. Honestly, this is one of the best frozen meals I have ever had, and if I received this dish in a restaurant I would be pretty darn happy with it. Along with their Kashi 7 Grain mixture they've added orzo pasta in a nod to Chicken Florentine's usual accompaniment, and again this lends the dish 5 grams of fiber to go with its 22 grams of protein. Wow! Those two together make this a VERY satisfying dish. With only 290 calories and 550 milligrams of sodium, you have to wonder why Lean Cuisine and Weight Watchers and the rest of the frozen meal companies aren't paying attention. It's obviously possible to make great frozen meals with real ingredients - Kashi does it!

The bad news is that while I was researching the numbers of winners and losers Kashi has had with us, I realized that we reviewed this meal back in 2007 and gave it only a so-so review. Lucky for us that I picked this up again - they must have changed their recipe at some point. We may have to revisit some of the other Kashi meals that we didn't like as well, as the Chicken Florentine is now one that you should definitely keep on hand.