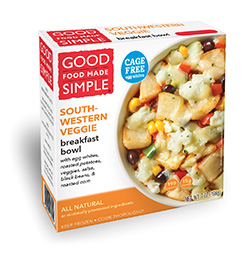 It's pretty gutsy for a company to call itself "Good Food Made Simple." After more than ten years and a thousand or so products, we here at Dr. Gourmet have learned to look askance at overblown marketing claims. We've been burned more than a few times on products that sound great on paper (so to speak) but when we got them out of the microwave....

And on paper both of the breakfast bowls we have today look great. Both ingredients lists contain nothing but real food: no "modified food starch" or "potassium sorbate" or anything - other than non-specific "natural flavor" - that might not be in your kitchen right now. That in and of itself is pretty impressive.

The cooking instructions, identical for both bowls, call for you to cut a slit in the overwrap, microwave for 1:45, then "carefully remove film and stir." Then "microwave for an additional 2 minutes." It doesn't specify to replace the film, but we did because the meal doesn't include a lot of liquid in itself - we were concerned that not re-covering the dish might mean it would end up too dry.

That turned out to be a good choice in both cases. Both varieties we tested contain scrambled egg whites that might have been too dry without the gentle steaming provided by replacing the film over the food. These are fluffy, not rubbery in the least (as we feared), and have a true egg flavor. Similarly, the roasted, diced potatoes also benefit from the steaming, being tender but not overcooked to mush. The Southwestern Veggie Breakfast Bowl (190 calories, 430mg sodium, 3g fiber) includes brightly-colored and -flavored roasted corn and a scattering of black beans to go with red and green diced bell peppers and diced onion.

The package describes the Southwestern Veggie as "for those... who want a little spice in the morning." The operative words here are "a little spice" - there's enough tomato, cilantro, and jalapeno here to give you a hint of Southwestern spice, but we'd rate this as not quite 1 pepper (on a scale of 1-4, with 4 being hottest). "A gentle spice," described one panelist: "My mother hates spicy food, but she'd eat this." (Those with GERD should use caution, however.) Overall? "You could do a lot worse. A LOT worse." We liked it. 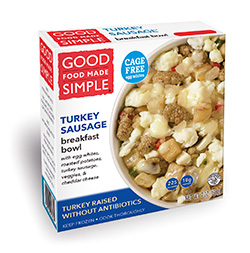 The Turkey Sausage Breakfast Bowl was in some ways even better: there's the same fluffy egg whites, tender diced potato and red and green bell peppers, but this dish adds significantly more cheese (never a bad thing, according to the panel). The sausage is tasty, if slightly chewy, and cut in fairly significant chunks that "taste like Thanksgiving," no doubt due to the savory turkey flavor as well as the sage in the sausage.

That said, while this has a very respectable 225 calories, it also has 615 milligrams of sodium (and only 1 gram of fiber). It tastes just a touch salty, no doubt due to the presence of salt in all three of the egg whites, sausage, and cheese. Unless salt is in the ingredient described only in the list of ingredients as "spices," there's no added salt in this dish: leaving out the salt in making the scrambled egg whites might have cut the sodium to a little more reasonable level. It's still a winner as far as the panel is concerned. We'll keep an eye out for their other products, although these two were the only ones we saw in our local grocery.