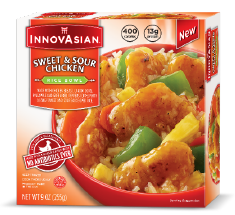 This week we have two items from a new (well, new to us) company that we discovered in our local Winn-Dixie: InnovAsian. I'd never heard of this company before, and there isn't any information on the company on their website, but a search on their company name revealed that they are headquartered in Tukwila, Washington (the state) and were founded in 1998. It appears that in 2012 they became a subsidiary of Nichirei Foods, a Japanese frozen food company.

I took a look at their website to assess their other offerings (it's always nice to find more items to review), but of the eight varieties of single-serving frozen meals, only the two we are reviewing today meet our criteria for sodium. Of all the other varieties, the lowest level of sodium is 740 milligrams. That's strange, because today's Orange Chicken has only 470 milligrams of sodium, and the Sweet & Sour Chicken has an impressively low 240 milligrams. I have to wonder why there's so much sodium in the other meals - and this extends to their multi-serving "meals" as well. I use the term "meals" advisedly, as the majority of the bagged, bake-and-serve meals are only the protein: usually chicken with sauce, although a couple meals do include some vegetables. Nearly all, again, have sky-high amounts of sodium.

For today's review we chose to start with the product that's lower in sodium: the Sweet & Sour Chicken (390 calories, 240mg sodium, 1g fiber). Sweet & Sour Chicken (or pork, for that matter) is tough to do well: too often it comes out distastefully, puckeringly sweet with nary a hint of sour. The product's scent is promising, with a sharp, tart scent and a spicy tang that reminded our panelists of Crystal Hot Sauce. 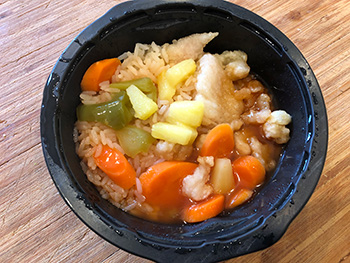 Almost all of the dish's elements are done well: the rice (white, unfortunately), is al dente and the carrots are done to a turn - still crunchy. The three pieces of green bell pepper we could find and the pineapple were rather softer than we'd like, but still acceptable.

"What are those white things?" asked a panelist. That's the chicken - breaded in a tempura-like coating. A little chewy, but savory, reported the panel: "Not any more chewy than you'd get at a Chinese restaurant."

Where this dish falls down is the sauce, and it's as bad as we feared: the sharpness in the scent doesn't come through at all in the flavor. "Wow. This is really sweet," said a panelist. Another: "This isn't 'sweet and sour', it's just sweet - very one-note." A third noted that "if there had been more green bell pepper, that might have balanced the flavors a little better."

We gave it a regretful thumbs down, but if you like your sweet and sour chicken on the sweeter side, you might enjoy this. 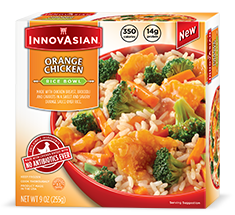 The Orange Chicken (350 calories, 470mg sodium, 2g fiber) smells a bit spicier than the Sweet & Sour Chicken, but has the same Achilles heel. As with the Sweet & Sour Chicken, there's well-cooked white rice, crunchy carrots (this time cut into matchsticks), and just a few bits of broccoli to give the dish color. The chicken is also the same: small tempura-battered slices no larger than a half-dollar or so. 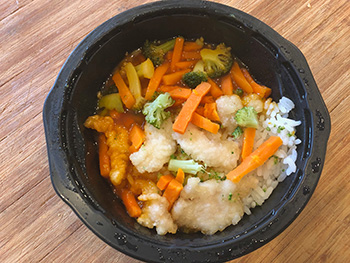 But the sauce: "It's like they took orange juice, simmered it for a while to concentrate it, and just poured it on there." Agreed another: "Yep. Just thick orange juice."

There's "a hint" of paprika, they admitted, but according to our panel the orange flavor is overwhelming. "If you have a piece of the chicken in the bite, it might mitigate the sweetness a bit," added a panelist, "but there's just not enough chicken in this bowl to mitigate it all."