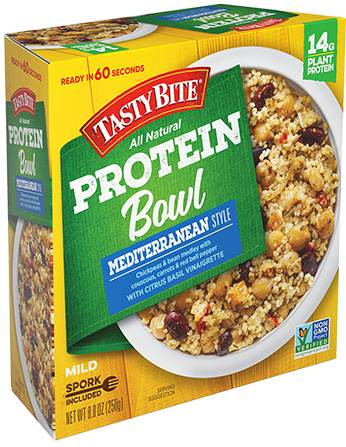 These are the first products we have reviewed from Tasty Bite. Their products are exclusively shelf-stable and until recently I had thought they were limited to a line of Indian entrees, such as Chana Masala or Spinach Dal, or sides like Basmati Rice or Cuban Rice. All are sold in packets that you simply tear open slightly and heat in the microwave.

We haven't reviewed their products because they are labeled "serves 2" - even though it's pretty obvious that like many canned soups, one package is really one serving. At least their packages do list the nutrition information for the entire package as well as "per serving" - but the lowest amount of sodium in a whole packet of one of their entrees is 750 milligrams for 370 calories (their Coconut Squash Dal).

These Protein Bowls were spotted at a local specialty market, Balducci's. They were $4.99 each but the idea of a shelf-stable bowl of beans and grains with a tasty topping could be a good one.

We began with the variety with the lowest sodium: the Mediterranean Style Protein Bowl. This has 400 calories, only 450 milligrams of sodium, and a whacking great lot of fiber - 16 grams! As you can see, these come with a bowl of the pre-cooked grains and beans, a packet of vinaigrette topping, and a spork: 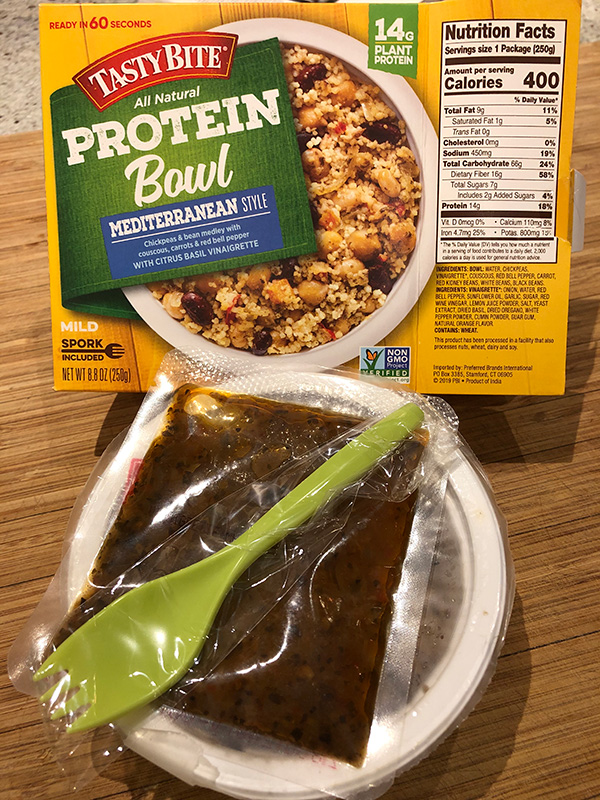 After 60 seconds in the microwave, you pour the vinaigrette over the contents of the bowl and eat - although the package notes that it can be served cold. 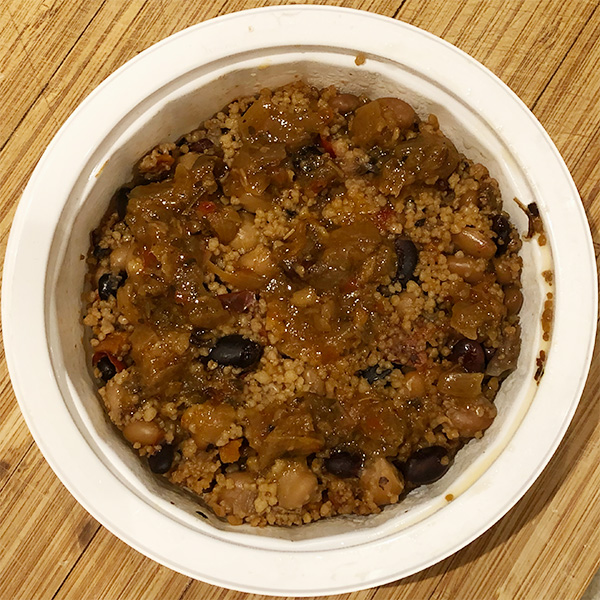 These seem to be another of those convenience meals that were created on paper but weren't tasted by humans before they were put into production. In theory this could be a good dish: couscous with white beans, black beans, kidney beans, and chickpeas. The couscous is fluffy, the beans are tender (perhaps bordering on too tender, but OK)... what's not to like?

The Citrus Basil Vinaigrette is only slightly basil-scented. The overwhelming flavor is of vinegar that ends with a vaguely sweet note of orange. It's not bad, but we could manage only a couple of bites before the vinegar was just too much.

Next we turned to the Indian Style Protein Bowl, which has fewer calories (380), a little more sodium (460mg) and not quite as much fiber (12g - still impressive). 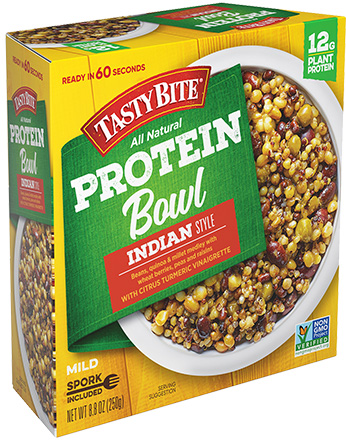 This is a mix of whole grain wheat, millet, sorghum, and quinoa, with peas, lentils, and two kinds of beans. 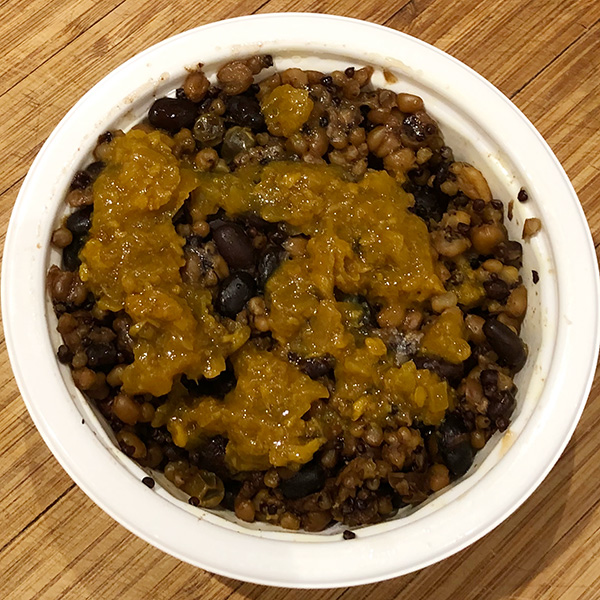 It also contains raisins, which may be why my wife's first remark was, "It smells like an oatmeal cookie," and it is oddly sweetish. Like the Mediterranean bowl, the beans are fairly tender edging into too soft. There's just not a lot of texture here. Again the overwhelming flavor is vinegar - and cumin. How this is supposed to be Indian is a bit of a mystery.

If any of these bowls were going to work it would be the Mexican Style Protein Bowl, which has 350 calories, 500mg sodium, and 15g fiber. 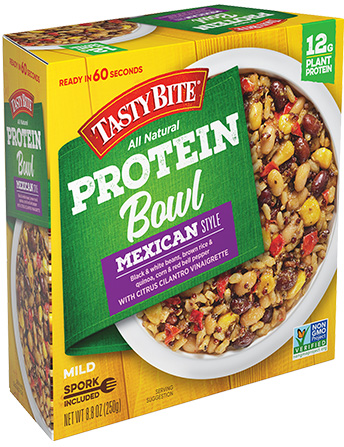 Here the corn does add a bit of texture to go with the black and white beans, brown rice, and quinoa. Like the other two, however, the vinaigrette is the dish's downfall, another sharply-vinegary liquid full of cilantro flavor and not much else.

This is the kind of thing you end up with when you take all the not-quite-gone-bad-but-almost little odds and ends of leftovers out of the fridge, put them in a bowl, and pour over it the last of the salad dressing you bought on a whim and then discovered you didn't much like. You might eat it out of a sense of obligation - it's in the house and you should use it up, after all - but not because you enjoy it.