Sometimes you just can't make it into the kitchen to cook. Dr. Gourmet has reviewed over 800 common convenience foods, ingredients, and restaurant selections so that you know what's worth eating - and what's not. View the Index of all Dr. Gourmet's Food Reviews 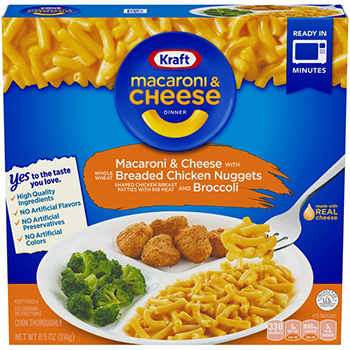 Why would you make frozen meals specifically for children?

My wife remembers that when she was a kid and her parents went out, leaving the kids home with a babysitter, the kids would have what was then called TV dinners: frozen meals delivered in metal trays that you baked in the oven. ("They were disgusting," she says.) There were no frozen meals marketed directly to children - there were just frozen meals, with each element of the meal in its own little cubby.

Early this year we reviewed two other varieties with predictably terrible results. We're not optimistic about today's varieties, either, but we've been surprised in the past, so we started with the Macaroni & Cheese with Breaded Chicken Nuggets and Broccoli, which has 330 calories, 680 milligrams of sodium, and 4 grams of fiber. 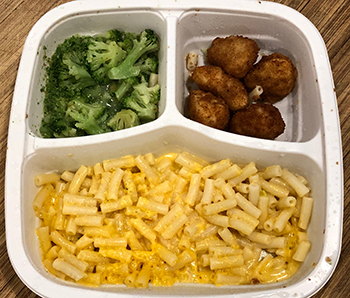 Half of those four grams of fiber come from the breading on the chicken nuggets: they used whole wheat flour instead of white flour. Impressive! Unfortunately, the nuggets themselves (five of them and quite small) don't fare well in their trip through the microwave - our panelists reported that they were "dry and sort of chewy," with very little flavor.

The highlight of the meal is the broccoli: almost all small florets, cooked to al dente, "quite flavorful"... and there's only about a quarter-cup. The vast majority of the calories from this meal come from the Kraft Macaroni & Cheese, which is... Kraft Macaroni & Cheese, "but mushier" - the pasta is incredibly overcooked. Worse yet, it doesn't have much of a cheesey flavor. This is more like punishment than nourishing your child. 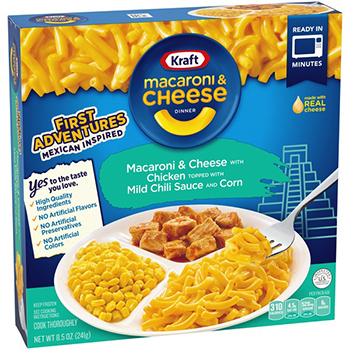 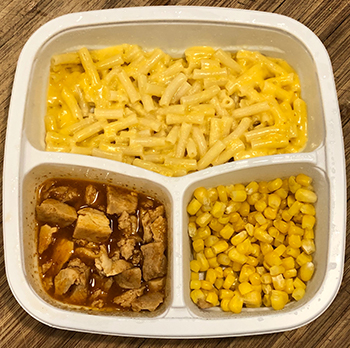 The corn is a little over-dry from 4 minutes (total) in the microwave, but it's, well, it's corn microwaved from frozen. There might have been some sort of butter sauce on it but we couldn't taste it. As with the broccoli in the other dish, there's perhaps a quarter-cup of corn.

The chicken, all 2 Tablespoons of it, is cut into a fairly small dice - so small a panelist wondered if Kraft had purchased its chicken from the processing leftovers from other companies. It comes in a thin, reddish-brown sauce that keeps the chicken fairly moist and gives it just the faintest hint of chipotle flavor ("Not even 1 pepper hot," observed a panelist).

And again, the vast majority of the dish is Kraft Macaroni & Cheese.

The pasta is so mushy and so lacking in flavor that one panelist noted, "Kraft Mac & Cheese is basically white flour with cheese-scented goo."

Nobody should eat this. Least of all children. And at $3.59 and $3.79, respectively, you could make a whole lot of really good mac and cheese that would actually be good for you.