Shrimp Scampi and Shrimp with Pasta and Vegetables 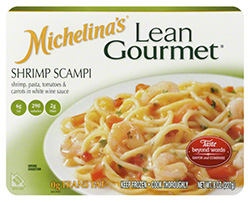 The last time we reviewed products from Michelina's it was 2014 - and before that the most recent review is from 2009. That ought to tell you something about their quality - in the eight products we've reviewed, only one has gotten a thumbs-up.

To be fair, part of the problem is the higher levels of sodium: I looked at a good half-dozen varieties we've never reviewed at all and rejected them sheerly on the basis of the sodium levels before realizing that it had been seven years since we'd reviewed the two meals we're revisiting today.

In seven years, maybe they've improved. It's happened with other meals, after all, and we do need more seafood options.

The panel chose to start our tasting with the Shrimp Scampi (280 calories, 600 mg sodium, 2g fiber). These meals come packaged in cardboard cartons without any interior plastic plates, which we appreciate on an ecological basis: there's less to recycle and no plastic at all. The down side, unfortunately, is that the instructions for cooking are most prominently displayed on the bottom of the package, meaning that after the first few minutes of cooking you have to pick up the hot package and hold it up high enough to read the bottom of the package without dumping the hot contents on your head.

After the requisite 3 minutes, stir, another minute of cooking and two minutes of letting the meal sit, we removed the lid and found... a very small portion. "That explains why it only costs a buck," said a panelist. (It's true: we paid $1.09 each for these at our local grocery store.)

There are seven shrimp in this meal, all of which are about the size of a dime. There are fewer than 12 pieces of julienned carrots, and despite protestations to the contrary on the front of the box, we couldn't find any evidence whatsoever of tomatoes. On the other hand, the shrimp are actually pretty tasty and not overcooked at all, and the carrots are crunchy. The pasta is "almost but not quite mushy," and reports on the sauce varied from "so subtle as to hardly exist" to "a slight garlic flavor."

The panel was about ready to give this dish a thumbs up on the basis of its price: "Is it a buck worth of good? Yeah, I guess so," but that moment was interrupted by the arrival of the metallic aftertaste which betrayed the presence of potassium chloride (a common salt substitute) in the dish. "Yuck. Not worth it." 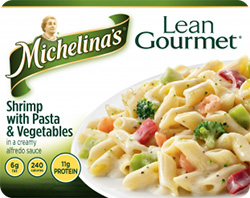 The Shrimp with Pasta and Vegetables (240 calories, 560mg sodium, 2g fiber) fared rather better, but only partially because this has no salt substitutes in it. For all that this dish has fewer calories than the Scampi and weighs the same, it just appears to be a larger portion. Certainly the penne rigate are much firmer and have more bite than the spaghetti included in the other dish, and the Alfredo sauce, while also subtle, "is definitely there."

Oddly enough, there are easily twice as many shrimp in this dish than in the Scampi (although they're the same size), but these are a bit chewier. The low price shows in its chintzy amount of vegetables: only 3 bits of diced red bell pepper, and two tiny florets of broccoli, with one medium-sized chunk of stem. This passed the "is it worth the price?" hurdle and got a thumbs up: "Definitely a dollar's worth of good."