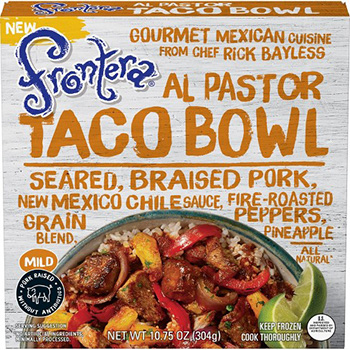 When I'm developing recipes, one of the things I focus on is the idea of balancing flavors.

As a chef friend of mine used to say, "It's easy to hide [a chef's] sins with fat and salt." These two flavors easily overwhelm all others, and while fat is easily mistaken for umami, or savory taste, salt is one of those flavors that people get used to, so they need more and more salt in a dish to perceive the dish as appropriately salty.

When you're creating healthier dishes, as I do, it's important to not only be aware of the amount of fat and salt in a dish, but also to balance the fat and salty flavors with sweet, tart, bitter, and umami flavors so that the dish tastes just as rounded as a dish that relies on fat and salt for its flavor.

The Frontera Taco Bowls from Rick Bayless in today's Food Reviews are good (but not great) examples of this attention to flavor balancing. The Dr. Gourmet tasting panel has given uniformly positive marks for all of the recent dishes we've reviewed: that is, all of the Taco Bowls, whether they are frozen meals for one or bagged and frozen meals for two. That's pretty darn impressive, and at least part of that success is due to flavor balancing.

For this week's tasting we started with the meal marked "mild" - the Al Pastor Taco Bowl. After last week's adventures in what might have been overcooking, we were careful not to overcook this dish, starting with 2:30 in our 1200-watt microwave, stirring, then following with 1:30. We did notice that although the directions noted that there was "no need to vent film," the transparent plastic sheet covering the bowl was already detached along the edge of the bowl - so it was already vented.

Fortunately, allowing steam to escape throughout the cooking process didn't seem to affect the dish's moisture level. In fact, it was rather more liquid than we expected: 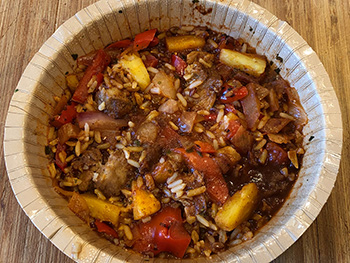 The Al Pastor Bowl is Tacos Al Pastor in a bowl: chunks of marinated pork with pineapple and a variety of other ingredients. The panel fully expected that the pork would be dry and flavorless, but instead found that the easily 3/4-inch-square chunks of pork here are "not just tender and juicy, but actually melt-in-your-mouth." That's impressive for frozen food. The sweet and savory pork has been marinated in a very mild tomato-based sauce with a touch of chipotle peppers, then Chef Bayless has added generously-sized pieces of softly crunchy red onion for tartness, grilled red bell peppers for a more tart sweetness, and then the pineapple balances it all out with its own sweetness, mellowed by the cooking process. All that is served over a mix of red, white, and brown rice along with amaranth, all of which are only a little overcooked.

Tacos al Pastor can easily become cloyingly sweet: often recipes focus on the pork and the pineapple to the exclusion of other flavors. The balance here is near perfect: even those panelists who swore they wouldn't eat anything with cooked pineapple on it ("BLECH!") were surprised at how well all the flavors worked together. We were also a little surprised at the numbers: with its 300 calories the dish has 650 milligrams of sodium (6g fiber), so we expected it to taste salty - but it doesn't. It's likely that the sweetness of the other ingredients masks the saltiness - and that's what I mean when I talk about balance.

That's not to say that Chef Bayless couldn't decrease the amount of sodium in the dish: he certainly could. But as it stands this is one of the better frozen meals we've had in a while: "certainly the best pork dish." 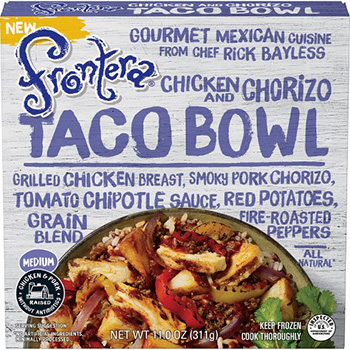 The Chicken and Chorizo Taco Bowl (290 calories, 660mg sodium, 7g fiber) is labeled "medium," so we tested it after the milder Al Pastor. Once again the (paper lined with plastic, not all plastic this time) film over the food did not fully seal the meal, but as with the previous meal we cooked it per the instructions, although for the minimum amount of time.

It also worked out pretty well. 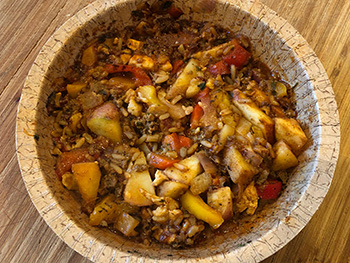 This Bowl appeared to have much less sauce than the Al Pastor, so the panel was a bit concerned that it might be overly dry. It would seem that either the sauce was hidden at the bottom of the bowl (possible) or the potatoes in this dish gave up enough liquid to keep the meal plenty moist (also possible) - once we stirred the dish it was clear that while it wouldn't be as almost-soupy as the Al Pastor, this wouldn't suffer from lack of moisture.

The meal starts with a base of the same red, white, and brown rice with amaranth that the Al Pastor is based on, then adds pork chorizo crumbles, grilled red and yellow red peppers cut into large dice, strips of red onion, slices of chicken breast, and unskinned red potatoes cut into chunks. All of this could go wrong in several different ways, yet again, it doesn't: the chicken isn't dry; the potatoes are still firm, with some bite, but neither raw nor mushy; the peppers and onions are cooked but still have a soft crunch; and the chorizo is smoky and savory without being greasy.

Labeled "medium," the sauce here has a more definite chipotle flavor with "just a little bit of an afterburn," according to the panel. The potatoes are a sweet counterpoint to the savory chorizo - our only criticism is that this might have used a little more chicken to bolster the appearance of generous amounts of ingredients. While this wasn't quite as impressive as the Al Pastor, this is another winner for Chef Bayless.