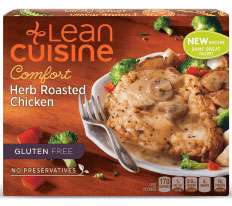 After discovering a few weeks ago that Lean Cuisine is making gluten-free meals, my wife has been scouting the frozen food aisles for more. We'd assumed that all of these varieties were completely new, but it does appear that at least some have simply been reformulated (I hesitate to call it cooking) to be gluten-free.

Today's Herb Roasted Chicken is just one of them. The last time we reviewed their Herb Roasted Chicken it received a resounding thumbs down for its overcooked vegetables and potatoes, cheap-tasting gravy, and metallic aftertaste. Still, to make it gluten-free they had to change a few additives at the very least, so here we are with it at the tasting table again (170 calories, 510 milligrams sodium, 3 grams fiber).

Back in 2013 this meal was cooked at 50% power for 9 minutes, presumably to avoid cooking the chicken into shoe leather. While the cooking time is now full power and about 30% less time, the chicken (a piece about the size of a deck of cards if not uniformly that thickness) is still fairly juicy and has a savory chicken flavor. The thinner edges of the chicken do tend to get a bit chewy, however. The gravy seems to have been improved, having a savory mushroom and garlic flavor without being overpowering.

Once again, the vegetables and potatoes are where this falls down a bit. The red potatoes are wizened and overcooked, and the broccoli is as well. Both are acceptable, however. The biggest difference in this dish is that somehow there isn't much of a metallic aftertaste, despite potassium chloride being the second ingredient in the dish - ahead of the vegetables and just after the chicken. The panel felt that the dish as a whole was a big improvement over the previous version: "a solid, simple meal," one panelist said. Well done, Lean Cuisine. 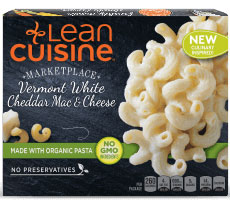 Our second item to review today is definitely new: Vermont Cheddar Mac & Cheese, with 250 calories, 690 milligrams of sodium (strike one against it), and just 1 lonely gram of fiber (strike two).

The good news is that the sauce is thick and rich and has great white cheddar flavor. But that's really the only good thing about it.

The problem is not only the numbers, but what you get, other than the sauce, just isn't worth it. There's easily half again as much sauce as you need for the tiny amount of pasta you get, and that pasta, being mushy and having only 1 gram of fiber, isn't going to stay with you for the afternoon. After you go find a piece of bread to sop up that sauce (at probably another 100 calories), you'll still find yourself looking for a snack a couple hours later.

What I really find obnoxious, however, is the "No GMO Ingredients" emblazoned on the label. Leaving aside the issue of genetically modified organisms, consider this: the fine print beneath the ingredient list on the side of the box states, "THERE ARE NO GMO VERSIONS OF THE INGREDIENTS IN THIS PRODUCT." This is a little like labeling an apple as gluten-free. Shame on you, Lean Cuisine, for playing on people's fears. Thumbs down for this product.