There's a saying that goes, "Sex is like pizza. Even when it's bad, it's still pretty good."

Well I'm here to tell you that it just ain't so, at least not when it comes to pizza. Sometimes when pizza is bad, it's just bad. 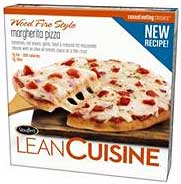 I must've been feeling optimistic when I chose Lean Cuisine's Wood Fire Style Margherita Pizza out of the freezer at my local Winn-Dixie. They've got a poor record when it comes to previous reviews of their Brick Oven Style Gourmet Mushroom Pizza and their Deep Dish Spinach and Mushroom Pizza. But those reviews were two years ago, I argued to myself, and besides, the box said "NEW RECIPE!"

The numbers are pretty good, too: 300 calories, 7 grams of fat, 2 grams of fiber and 16 grams of protein. On the box it describes the pizza as, "tomatoes, red onions, garlic, basil & reduced fat mozzarella cheese with an olive oil tomato sauce on a thin crust." "Wood Fire Style" appears to mean that the pizza crust looks hand-shaped, but the fact that the pizza is encased in a heat-shrunk plastic wrapper gave me my first inkling of what was to come.

Like their other pizzas, this one is cooked on a silvery surface inside the package that's intended to crisp the bottom of the crust. Sadly, it does nothing of the kind. The crust is simply chewy. As for the toppings, if I hadn't read the box I would not have known that there were red onions or garlic on the pizza - the tomatoes and basil flavors came through, however. (The tomatoes were mush). Not the mozzarella or the sauce, however. Leave this one in the freezer section and get some pita bread instead to make your own, better pizza: here's the recipe.

Now, the Healthy Choice French Bread Pepperoni Pizza seemed much more promising straight out of the package. There's a lot of pepperoni on this pizza! Like the Lean Cuisine, this one is also cooked on an interior silvery surface, but since it's French bread, I didn't really expect it to actually get crispy.

While it was cooking the pizza smelled great - like pepperoni pizza! As I expected, the French bread was soft and chewy. Fine, I guess, if you like French bread pizza. But Healthy Choice has managed to find pepperoni that is nearly flavorless. And it's not because it's low-fat: the turkey pepperoni I buy at our local grocery store has great flavor.

Another surprise was the cheese. The cheese on the Lean Cuisine pizza is described as "reduced fat" while the Healthy Choice cheese is "nonfat." I would have been concerned about the nonfat cheese not melting, but in both pizzas it melted just fine. The problem, again, was the flavor. One of the things you love about pizza is the cheese, right? Here (and in the Lean Cuisine pizza) the cheese melts into a whitish goo that has no flavor whatsoever. The worst part is that Healthy Choice's pizza sauce is really good! Nice tomato and oregano flavor. Bright and zesty. If they bottled that, they'd have a good product.

Next week we'll be testing some gluten-free pizzas. Keep your fingers crossed that the saying isn't proved wrong again.