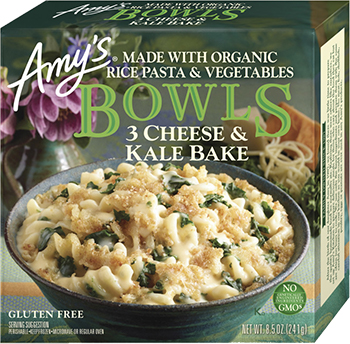 I have to tell you at the outset of today's review that the items we reviewed for today are rather higher in sodium than we'd like: they both contain 780 milligrams. Ordinarily this would put them out of the running completely.

Yet as I stood in the grocery evaluating these items' nutrition information, I remembered our recent emphasis on the sodium to calorie ratio: although the sodium levels are indeed pretty high, these also are comparatively high in calories for single-serving frozen meals. So I did the numbers and found that the ratios are 1.6 (for the 3 Cheese & Kale Bake, which has 470 calories) and 2.2 (for the Santa Fe Enchilada Bowl). We've had other meals with higher ratios, so in the end I brought them in for testing.

We started with the 3 Cheese & Kale Bake. 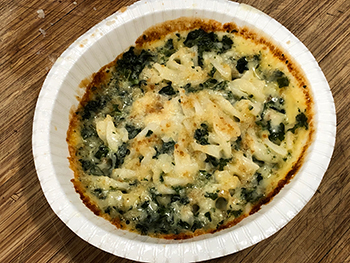 "It smells really cheesey, like a good mac and cheese."

This dish is gluten-free, and we feared that the pasta would have the same fatal flaw that so many gluten-free pastas have: it breaks down when you stir the dish. Not so here, however, the fusilli are cooked to al dente. Unfortunately, that gluten-free pasta means the dish has one 1 gram of fiber.

The sauce is so thick and creamy and cheesey that I'd have a hard time imagining anyone who likes mac and cheese not loving this. True, there's plenty of shredded kale, which might put some people off, but in this dish the kale's flavor - nearly overwhelmed by the cheese in any event - reminded us more of spinach with its slight bitterness.

The down side: as we passed the dish around the table we started noticing the shimmer of extra oil in the bottom of the bowl. A look at the nutrition information shows that it contains 21 grams of fat, of which 12 grams are saturated fat. Given its low sodium to calorie ratio and its impressive flavor, we'll give this a thumbs up with the caution that this is not something you should be eating regularly. Save it for a treat. 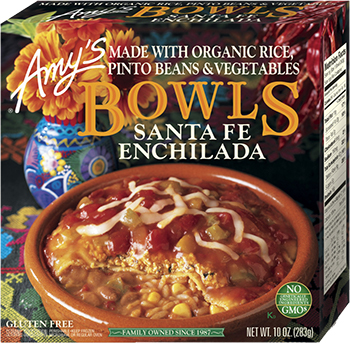 We last reviewed this Santa Fe Enchilada Bowl in 2009, so it seemed a good idea to revisit it. As I mentioned earlier, this has 780 milligrams of sodium to go with its 350 calories and impressive 9 grams of fiber. These seem to be the same numbers as they were ten years ago (and even the same packaging, which surprised us). 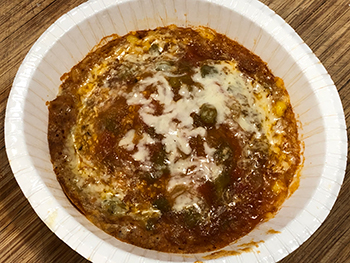 This may not look like much, but it doesn't matter because it tastes so darn good.

As before, this is a layered dish of Spanish rice and refried beans below a thick corn tortilla, which is then topped with a sort of hash of finely diced tofu, corn, black beans, onions, and bell peppers. It's all covered with enchilada sauce and a bit of jack cheese.

"This tastes like a tamale with enchilada sauce on it," said a panelist. "A good tamale."

The tortilla tastes like it was made with masa and has a characteristic hint of lime to go with its true corn flavor. The refried pinto beans are creamy and savory, the rice is well cooked and has hints of tomato and cumin, and the whole is as cheesey, savory, and satisfying as you would want it to be. We'll give this a continued thumbs up - just watch your sodium intake for the rest of the day if that's something you're concerned about.