It's always nice to find something new and interesting to review. Recently I was in Walmart and spotted an entirely new line from Lean Cuisine. They call it "Veggie Cuisine" and it contains a proprietary meat substitute they call "Gardein™," which is faux chicken ("chick'n") they say is "made from the finest selection of vegetables, grains and soy protein to be delicious and nutritious." As their sodium levels were on the high side, but not overly so, I took all the varieties I could find (there are four total) home to review. Today we'll try two of them and the other two (if I can find them) in a couple of weeks. 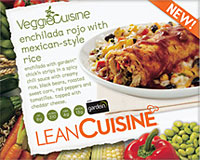 The first one we tried is the Enchilada Rojo with Mexican-Style Rice. This smelled pretty familiar as it came out of the oven, and when I tasted it I knew why: the rice, a mixture of white rice, black beans, corn, red peppers and tomatillo sauce, tastes just like their Santa Fe Rice and Beans. That's good news, as the sauce has a nice spicy zing and the resulting afterburn from the right amount of chili powder. This rice has a lot more cheese than the Santa Fe version - a LOT more cheese.

The enchilada itself is wrapped in a corn tortilla topped with red enchilada sauce. The sauce is nothing particularly special - it's what you would expect a mild red enchilada sauce to be. The filling seemed a little less than generous, however, and when I peeled open the tortilla I discovered a few pieces of roasted poblano peppers and a few chunks of the "chick'n." As you might expect, they don't taste like chicken, but they do have more texture than, say, tofu. All in all I'd say that if you're looking to eat meatless more often at work and would like an enchilada, this will definitely fill the bill. It has 310 calories, 670 milligrams of sodium and 4 grams of fiber. 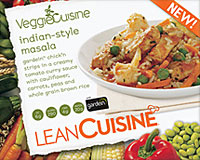 The second one, the Indian-Style Masala, was disappointing, however. This is "chick'n" strips and cauliflower chunks in a masala sauce with brown rice containing some peas and julienned carrots. The brown rice is overcooked and utterly bland, even with the peas and carrots. The cauliflower is properly cooked and still crunchy, but the masala sauce is.... oddly sweet, with very little discernible Indian spices, whether curry or otherwise.

There's a fairly generous amount of the "chick'n" in this dish, and it shows in the 20 grams of protein in this dish versus the 13 grams in the enchilada, but the good-sized chunks, about an inch long and as thick as a pinky finger, have an odd aftertaste. I couldn't place it until I thought of wet cardboard. The flavor's not unpleasant and the texture of the meat substitute is indeed meat-like, but that subtle wet cardboard aftertaste is off-putting. If you mix the whole thing together so that the rice mixes with the sauce, that does improve the flavor of the rice, but it's the combination of the "chick'n" chunks and the bland sauce that puts this one on the "Avoid" list. This dish has 290 calories, 640 milligrams of salt and 4 grams of fiber, but it doesn't matter because you don't want to bother with this one anyway.