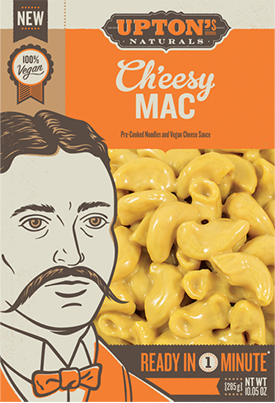 In March of this year we discovered Upton's Naturals through their "Real Meal Kits" - Pad See Ew and Thai Spaghetti. Both of these received negative reviews, and both were billed as 2 servings, although the amount of noodles in the Pad See Ew didn't even reach the level of one serving (a serving of pasta is 2 ounces). There were other problems, but the biggest issue for us was that they just didn't taste very good, and that's really what the Dr. Gourmet Food Reviews are all about: finding convenience meals that are healthy and also taste good.

Unfortunately we were reminded of our commitment to this motto again for today's reviews of Upton's Naturals' Ch'eesy Mac and their Ch'eesy Bacon Mac.

Like the "Real Meal Kits", these are shelf-stable meals. Although the instructions on these also include cooking on the stovetop, we chose to use the microwave instructions, reasoning that if one were going to have these for lunch (despite the fact that they are two servings), you'd be far more likely to microwave than to actually cook. 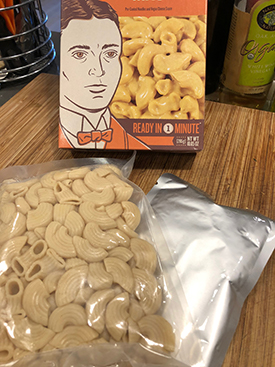 Open either of today's offerings from Upton's Naturals, and here is what it contains: a package of pre-cooked pasta and a silver envelope of sauce.

We started with the Ch'eesy Mac (270 calories, 300 milligrams sodium, 3 grams fiber). Once again, it's important to note that this package contains 2 servings. Sure, even if you eat the whole thing it's 540 calories, 600 milligrams of sodium, and 6 grams of fiber, but I like to see my patients keep their lunch intake under 450 calories, so bear the number of calories in mind if you choose to have this for lunch. 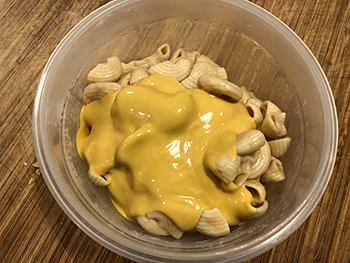 As you might expect, place the contents of the two packets into a microwaveable bowl and this is what you see: cooked and extremely well-drained pasta topped with a yellow-orange sauce. 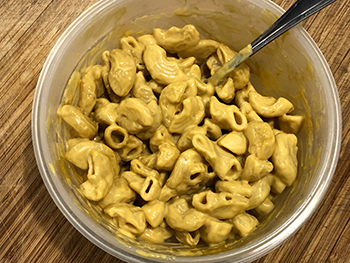 Stir the two together and microwave for 1 minute, and this is what you get.

The panel noted right away that this smelled more of mustard than anything else, and thought that the sauce was far more mustard-colored than they thought it should be.

The pasta is quite good, with a firm al dente texture. The scent, unfortunately, was prescient: "This sauce does not taste like cheese," said a panelist definitely.

According to the panel, the sauce tastes like mustard, cardboard, corn (there's a fair amount of corn starch in this, per the ingredients list), and nutritional yeast. Cheese? Not even close. 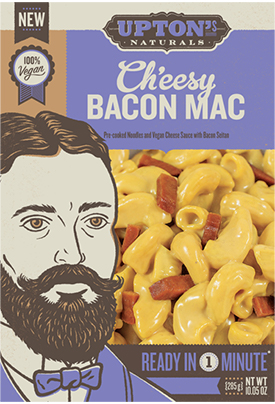 We hoped that the Ch'eesy Bacon Mac (270 calories, 270 milligrams sodium, 4 grams fiber, package serves 2) might be better: the company makes good seitan, so perhaps a "bacon" would help make the whole taste more like, well, cheese with bacon? 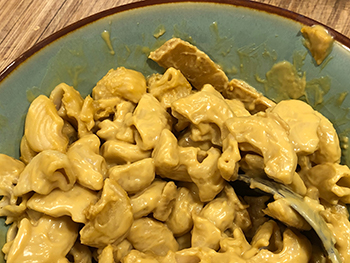 The Ch'eesy Bacon Mac includes the same pasta as the Ch'eesy Mac and seems to include the same "cheese sauce" as well, complete with its mustard and corn overtone. This, however, has the addition of more wheat gluten (seitan?) and "liquid smoke."

The slivers of "bacon" you can see in the image above taste like "nothing so much as cardboard soaked in artificial smoke flavor" or at best "really cheap, like pressed-from-the-leftovers-cheap bacon."

The verdict: "This is more of the sort of thing that gives vegan a bad name," said the panel. It might be vegan, but it isn't good food.