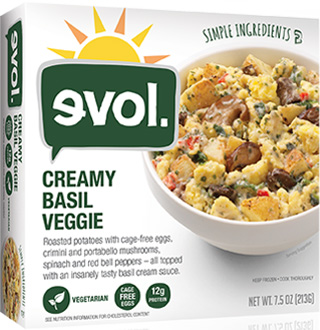 Only one of the two evol Foods breakfast bowl varieties on the shelf at my local Winn-Dixie had low enough sodium to review: the other, the Breakfast Sausage and Uncured Bacon Bowl, has 850 milligrams of sodium (wow).

The Red's All Natural bowl was simply the only variety available - it seems the Steak, Rice & Corn Salsa Bowl was sold out. We'll keep an eye out for it, though, as Red's All Natural Burritos have a very good track record with us - far better than that of evol Foods. 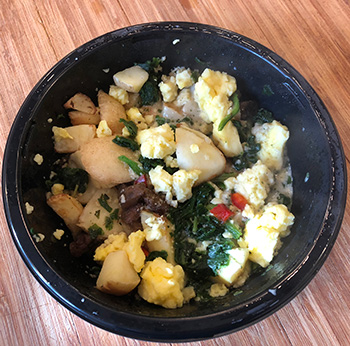 The dish has a fresh basil scent, but as you can see, the contents of the bowl (only half full, too) are mainly potatoes: they're tender and well cooked, but a bit grainy, which leads me to believe that they are Idaho potatoes. The scrambled eggs included in the dish are fluffy, soft, and flavorful, but there doesn't seem to be much of them; we estimated that there's perhaps half of one scrambled egg here.

The aforementioned mushrooms are mostly in 3/8 inch dice form, and to be very honest don't add all that much flavor: they don't appear to have been roasted before adding to the dish, so they're rather watery and their umami flavor is "muted." Similarly, there isn't much spinach, either, nor are there more than a few scattered bits of red bell pepper. Too bad; more of both, the panel agreed, would have been "excellent," as they added hits of bitterness and spice, respectively. The basil sauce is indeed tasty, but not overwhelming, and on the whole, the panel found it "pretty good, but could have been much better." 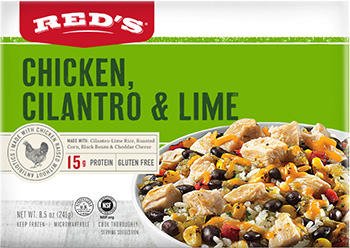 It's interesting to see Red's All Natural adding to their product line, and maybe a little concerning. evol Foods started out with burritos, as you may know, but the more and more varied types of products they add to their product line, the less likely it was that those products were actually good. (Take their mac and cheeses for instance. No, don't: they're terrible.) It seems that Red's is approaching this expansion of their product line more cautiously than evol: the Chicken, Cilantro & Lime bowl (360 calories, 330mg sodium, 3g fiber) is "basically a burrito in a bowl," as our panel described it. 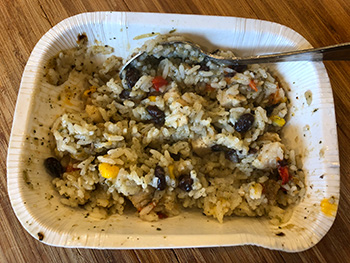 This would be more accurately described as "Cilantro Lime Rice with Chicken," according to a panelist, and I have to agree: the vast majority of the meal - easily 80% - is overcooked, mushy white rice with a strong cilantro and lime flavor. It's dotted with 1/2 inch cubes of fairly tender, savory chicken, black beans that are just as overcooked and mushy as the rice, and pops of corn kernels for sweetness. Truly, the only texture in the dish comes from the solid chew of the chicken and the more-or-less crunchy corn.

Don't get me (or rather, the panel) wrong: they liked it. A lot. But they are fond of cilantro and lime and are OK with mushy white rice. I myself would rather that Red's used brown rice for more flavor, texture, and fiber, but we review foods as they are, not as we think they ought to be. In any event, the panel voted unanimously to give the dish a thumbs up.