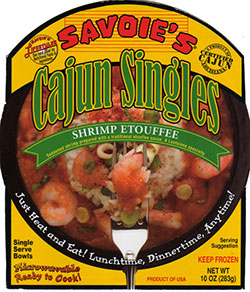 New Orleans loves its Cajun and Creole food, and we and the tourists who visit us sure eat a lot of it. The problem is that so many of the restaurants that serve Cajun and Creole food have fallen prey to something a chef friend of mine observed years ago. He said, "As a chef, it's easy to hide your sins with fat and salt." In too many well-known restaurants here in New Orleans you can easily have a meal of an appetizer, main course, and dessert that contains upwards of 3,000 milligrams of sodium (remember that the American Heart Association recommends less than 2,400 milligrams per day - not at one meal) and sometimes more. Lots more.

But given how much we love our Cajun and Creole food, it's no surprise that there are a fair number of local food companies whose meals appear in the frozen food aisle. Zatarain's, for example, is perhaps best known outside New Orleans for its seasonings, but their frozen foods appear in just about every grocery store in town. We here at Dr. Gourmet haven't reviewed these local frozen food brands before mostly because they're not widely available outside the New Orleans area, but also because these foods, like the foods served in our restaurants, tend to be really high in sodium. (Zatarain's frozen Jambalaya has a whopping 860 milligrams of sodium, for example.) 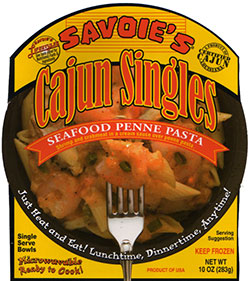 Recently we discovered a notable exception to the sodium rule, so we thought that for the sake of our local readers, we'd review them. For those readers who aren't in our local area, we apologize - but the good news is that these products are available online.

Savoie's Foods (pronounced Sav-WAHs) is a "Certified Cajun" company started in 1949 as a family-owned local grocery store in Opelousas, Louisiana, and its frozen foods, sausages, and other food products are available as far away as Chicago. Their single serving frozen meals are branded "Savoie's Cajun Singles," and the first one we chose to taste is perhaps the most stereotypical Cajun or Creole meal next to Red Beans and Rice: Shrimp Etouffee.

The numbers on this meal are actually quite good: 260 calories, only 2 grams of fat and 390 milligrams of sodium, and 2 grams of fiber, which is not surprising given that it's made with white rice. And it smells great coming out of the microwave, with the evocative scent of the classic etouffee: green bell peppers, onions, shrimp, and cayenne pepper. The problem, however, is with what you actually receive in the bowl: white rice and perhaps 5 tiny shrimps with a sauce that disappears into the rice when stirred together. There's no sign of actual pieces of bell pepper, onion, tomatoes, or celery. While the rice has good etouffee flavor, that's really all this is: rice. We just can't recommend flavored rice.

After that disappointment, we turned to the Seafood Penne Pasta. This certainly seemed much more promising as we put it into the microwave - there was clearly plenty of sauce to go with the penne pasta. And again, the numbers are pretty good, with 430 calories, 590 milligrams of sodium (a not outrageous amount considering that this is a frozen meal), and a nearly-unbelievable 9 grams of fiber. With plain white pasta? How did they do that? 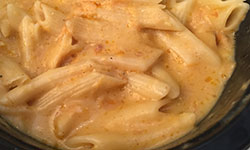 But it really doesn't matter whether we believe it or not, to be honest. This is another case of nearly-invisible seafood - we did find one whole shrimp about the size of a dime. The pasta sauce is thick and gooey and as you can see in the picture, the globules of fat floating in it make it rather unappetizing. The pasta is nearly mush and the flavor of the sauce is that of Creole-scented melted Monterey jack and Velveeta cheese. Nobody should eat this.

We'll try other varieties from this brand - mostly because they've already been purchased - but we're not necessarily looking forward to it. The sodium levels might be better than what you'd get in a restaurant here in New Orleans, but the food at the restaurant would definitely be better in terms of quality. Or best yet, make your own Cajun/Creole food at home with my recipes for Red Beans and Rice, Jambalaya, or Shrimp Etouffee.