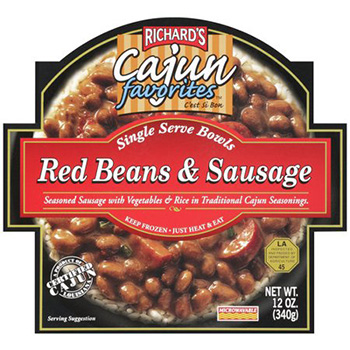 This week we return to what has seemed to be an impossible quest: to find frozen foods that bring the taste of Louisiana and New Orleans to you without excessive amounts of salt. And salt has been the big stumbling block: by far the vast majority of frozen meals featuring what people think of as "New Orleans flavor" are not just a little salty, but a LOT salty. I've seen meals that have around 300 calories with as much as 1,500 milligrams of sodium. That's about 3/5 of a teaspoon of salt in one meal.

So our tasting panel's visits to New Orleans food have been few: we started back in 2012 with Emeril's Cajun Creations, both of which were a real disappointment. In 2014 we discovered Savoie's Foods, whose Cajun Singles were uniformly unacceptable. Our most recent foray into New Orleans food came from Zatarain's in 2015, whose meals were as disappointing as Emeril's. (Hmm. I just looked at Emeril's website and it appears that he's discontinued his frozen meals.)

After those disasters I admit that for the last three years I haven't bothered to even look at the nutrition information on the many varieties of frozen foods from companies local to New Orleans. Why subject our panelists to terrible food when there are so many other products to test that are far more likely to be available to those readers who aren't local?

And yet... recently I was in our local Rouse's grocery store and was browsing through their frozen foods aisles in the hopes that I might spot something new. After all, this is where I discovered that Rick Bayless' Frontera Foods had (re-)entered the frozen food business, and look how well that turned out. I spotted the Richard's Cajun Favorites not far from the Frontera Foods, and on a whim started checking nutrition information.

When people talk about New Orleans food, the first item they talk about seems so be either Red Beans and Rice or some kind of Gumbo. Imagine my surprise when I picked up the package of Red Beans & Sausage from Richard's Cajun Favorites, read the Nutrition Facts panel on the back of the product, and discovered that along with its 290 calories and 9 grams of fiber, it had only 600 milligrams of sodium, which in my opinion is almost shockingly low for frozen foods from local companies. I checked other items from the same company for similarly "reasonable" levels of sodium and only found one: the Shrimp and Okra Gumbo (290 calories, 580mg sodium, 2g fiber).

Accordingly, they appeared at our next tasting.

The Red Beans & Sausage calls for slitting the plastic film covering the food and cooking it for 2 minutes, pulling the film back and stirring, re-covering, and cooking for another 2-3 minutes. The package does note that after the first cooking the center of the meal may still be frozen, and this was the case. Bearing that in mind, we replaced the meal in the microwave and continued the cooking for the full 3 minutes. After allowing the meal to rest for the requisite 1 minute, we had this: 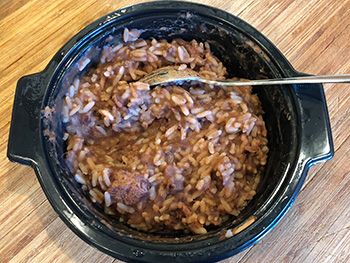 "I like my red beans thick, but..." a panelist trailed off in some dismay. S/he was right. While some chefs make their red beans rather soupy and others like them to be thicker, this dish looks much more like refried red beans with sausage and parboiled rice (no need to say more than that about the rice) than anything closer to the soup end of the scale.

The flavor is really good, however. Every bite is primarily flavored with slow-cooked red beans and a bit of chili powder to warm up your mouth, starting from the back of your tongue. The sausage is cut lengthwise and then crosswise into half-moons, and while some of the pieces we tasted were somewhat dry and chewy, those pieces that were cooked deeper in the dish where not - and all of the sausage had plenty of what our panel of tasters described as "local flavor" - which I interpret to mean like smoked pork sausage with a fair amount of cayenne or chili powder for spice. As with many home-cooked plates of red beans and rice, the "holy trinity" of red bell peppers, onions, and celery aren't particularly visible, but this is usually because the dish is cooked for so many hours that the vegetables simply disintegrate into the dish. Overall, the panel said simply, "It tastes like red beans and rice." 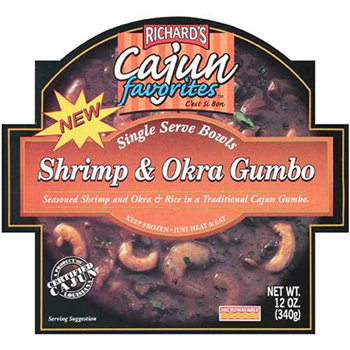 I was particularly interested in how the panel viewed the Shrimp & Okra Gumbo. Gumbo is a challenge to make at the best of times because of its cultural significance: quite heated arguments about the appropriate ingredients break out fairly regularly on social media sites devoted to New Orleans food. Fortunately it does not suffer from the same problem as the red beans: this is definitely a soup, with the same parboiled white rice as in the Red Beans & Sausage but far more liquid. It certainly smells like an okra-based gumbo, and the panel assured me that it tastes of it as well: "like okra and stewed tomatoes, with some green bell pepper," they said. 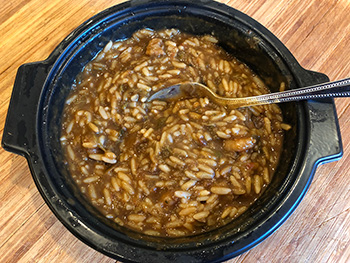 As I expected, the shrimp in this dish are tiny: perhaps 2/3 the diameter of an American quarter dollar. Yet despite their small size they do have good shrimp flavor and are not overcooked (which may well be due to our choosing to cook the dish at closer to the minimum end of the range of cooking times rather than any particular quality of the shrimp themselves). While the Red Beans & Sausage had a definite back-of-the-tongue spice to it, the gumbo does not, having its flavors primarily savory and umami (although there is a hint of red pepper). "If you overlook the size of the shrimp," said the panel, "this is pretty tourist-level gumbo." By that, they explained, they meant that this is about as good as you'll find in the more tourist-centered restaurants in the French Quarter: solid but not impressive.

A caveat: while researching these products I visited the Richard's Cajun Favorites website and reviewed the nutrition information for all of their frozen meals. The Red Beans & Sausage package's nutrition information states that there are only 600 milligrams of sodium in the dish. Their website, however, states that the dish contains 1,470 milligrams of sodium. That's over 200% difference, and I find it hard to believe that it might be a simple typographical error. I would avoid the Red Beans & Sausage until the website and the package match. Have the gumbo instead - at least the information on the website and the information on the package match.