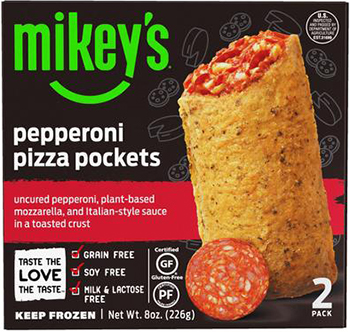 Okay, they're not actually made by Hot Pockets, the brand owned by Nestlé. This company, Mikey's, was founded in 2014 and is based in Pennsylvania. According to its website, it was founded by Michael Tierney, who is reported to be a "classically trained chef" who created their first product, gluten-free English muffins, from ingredients he had on hand in his kitchen. (I haven't had their gluten-free English muffins, but it's on my list for a future review.) All of Mikey's products are not just gluten-free, but also free of all grains as well as free from soy and dairy.

In addition to being certified gluten-free and free of other grains, soy, and dairy, their pockets are all "certified Paleo." Curious, I looked into this Paleo certification and found that the Paleo Foundation (www.paleofoundation.com) is apparently a non-profit organization that exists to certify products as "paleo", "grain-free", or "keto". The website aggressively markets certification as being a money maker: "According to consumer studies, the single-most impactful form of trust signaling is from Third-Party Certification. Thus, third-party Certification increases brand trust." And brand trust, they make clear, means repeat sales, which means more money.

"Paleo", "keto", or simply food, the three varieties of hand-held meals (that are not burritos or "squaritos") we have to review today are still, as my wife observed, essentially "Paleo Hot Pockets." But are they any good?

The first one we tried is the Pepperoni Pizza Pocket (320 calories, 340 mg sodium, 5g fiber). The numbers are pretty impressive, so we hoped for impressive flavor - and this did not disappoint. The crust, which seems to be identical regardless of filling variety, reminded me of whole wheat calzone dough (although of course it contains no wheat). Not slimy or too chewy, and after allowing the pocket to cool for 2-3 minutes we could pick the pocket up and eat it with one hand - no splitting.

The filling tastes saltier than it is. With a savory tomato flavor and plenty of pepperoni, its dried basil and oregano flavor took me back to eating cheap pizza in my high school days in New Jersey. Don't get me wrong - that's a good thing.

The second product was their Ham & Cheese Pockets, with 300 calories, 490 milligrams of sodium, and 4 grams of fiber. 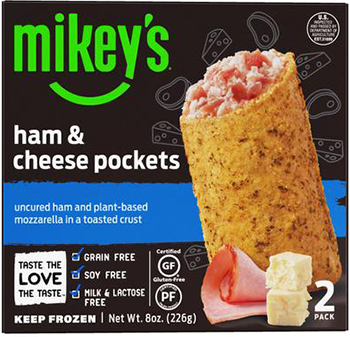 With such a good precedent set with the Pepperoni Pizza Pocket, we hoped for the same quality from this variety, but it wasn't meant to be: while the crust is well filled, it looks like baby food. 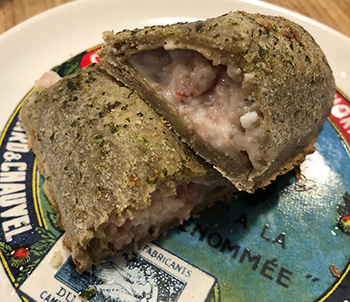 Tiny bits of sliced ham swim in a "plant-based" mozzarella and the whole tastes "slimy," as one panelist described it. Maybe we got a bad batch, but these taste like the ham is just about to go over. Or maybe it just now went over. We can't recommend this variety. 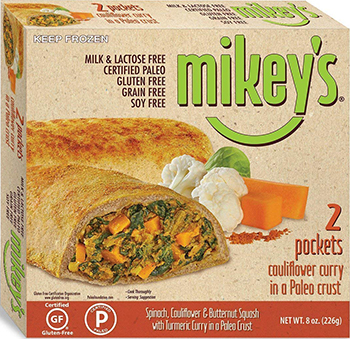 Finally, the last variety we tested was the Cauliflower Curry Pocket, with 230 calories, 40 milligrams of sodium (not a typo: FORTY milligrams), and 6 grams of fiber.

This one is an unfortunate near miss. The texture of the filling is very good, with chopped spinach and diced butternut squash seeming to be the primary ingredients. (In fact, we couldn't understand why they called it cauliflower curry.) Unfortunately, there's so much flowery cardamom spice in this pocket that the whole thing really tastes of nothing but cardamom and curry powder. In truth, a little more salt would have helped balance the flavor. Another one we can't recommend, especially when these are $5.99 per package of two.