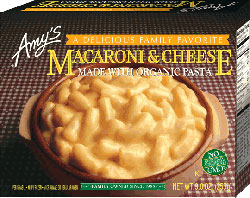 With macaroni and cheese so ubiquitous in the freezer case, you'd think that we would have reviewed Amy's mac and cheese just yesterday - or maybe a couple of years ago. Our panelists were certain that was the case. After all, we did a Mac and Cheese Roundup just last year.

But the Amy's that appears in that roundup was their Rice Mac & Cheese - and that one we reviewed in 2009. We last reviewed Amy's standard mac & cheese over ten years ago. It's certainly time to revisit that old standby, and today we're able to compare it head-to-head with the Light in Sodium version - which didn't even exist way back then.

The full-sodium version (we'll call it 'the standard' from now on), according to our records, has 50 milligrams more sodium than it did before (it's now 640 milligrams), but none of the other numbers, including fat and saturated fat, have changed (400 calories, 3g fiber). 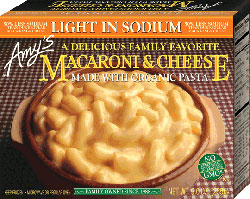 It's worth mentioning at this point that this is also true of the Light in Sodium version: other than the amount of sodium (290 milligrams), the numbers are also the same as the standard version. Indeed, the ingredient list is exactly the same as well. This may be a good sign.

The first time we reviewed the standard Macaroni & Cheese we chose to bake it in an oven. This time we microwaved them - separately, of course. Four minutes, stir, and then the box says to cook it an additional 2 to 3 minutes, but in both cases we kept it to an additional 1 minute because of our extra-powerful microwave.

The standard mac has a strong and savory cheddar scent that is borne out fully in the thick and cheesy sauce. Even in the microwave, this ends up with the crispy edges that some people so love about baked mac and cheese. The panel felt it tasted a little salty, but "not all that salty." (How's that for equivocal?) The pasta comes out with a nice, al dente bite to it, which along with the 3 grams of fiber makes it "pretty filling."

The Light in Sodium version has the same al dente pasta, but the sauce is a bit creamier than the standard version and does not crust along the edges. The scent of the sauce might not be as strong as the standard, but it does smell and taste plenty cheesey, if lacking "that extra-salty bite." The cheese flavor is a little softer in the Light in Sodium version, but the panel agreed that the difference in sodium can really only be tasted in a head-to-head comparison like this one.

Overall, the standard version is still quite good and would make a great weeknight meal with a side salad or vegetable. But the Light in Sodium version is just as good, and better for you.