Healthy Choice products have been getting steadily better in the last year or so. Their Select Entrees and Steaming Entrees have done well in our reviews, so when I picked up today's selections I was fairly confident that we'd have another couple of positive reviews - a nice change from the days when nearly every review was an exercise in choosing the best of the worst. 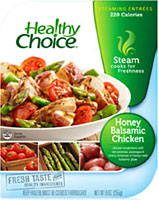 The Steaming Entrees packaging is still serving Healthy Choice well. The first meal we reviewed was the Honey Balsamic Chicken, a mix of red potatoes, asparagus, cherry tomatoes and chicken in a honey and balsamic vinegar sauce.

It has a tangy balsamic scent and big chunks of potatoes, and the asparagus isn't just chunks of stalk - there are tips, too Even though the chicken chunks aren't very large, they're not over dry from the steaming, and the asparagus remains crunchy. The balsamic vinegar sauce has just a hint of honey to balance the tartness of the vinegar. The numbers for this meal are good: only 220 calories with 5 grams of fiber and a respectable 500 milligrams of sodium. 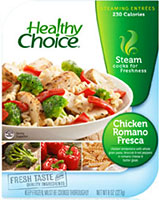 The second meal has similar stats, with 230 calories, 4 grams of fiber and only 490 milligrams of sodium. The Chicken Romano Fresca has "whole grain" pasta with chicken, red bell peppers and broccoli in what is described as "the bold flavor of Romano cheese [in] a delectable butter glaze."

Again, the chicken isn't overdone and the pasta is only a little over cooked, but the four (yes, I counted) pieces of broccoli are mushy and the whole meal smells strongly of the red bell pepper. Unfortunately, it doesn't taste like much of anything. I can hardly detect any Romano cheese, and the sauce is flavorless. This meal isn't bad... it's just not good, either.

Overall, I have to give both meals this week a pass, which is good news - in a way. Frozen meals have come a long way if we're panning them because they're not interesting!