My wife and I saved the Panko Ranch Pork Chops for last as we suspected that they'd be the messiest to cook. You'll see why shortly.

This dish came with 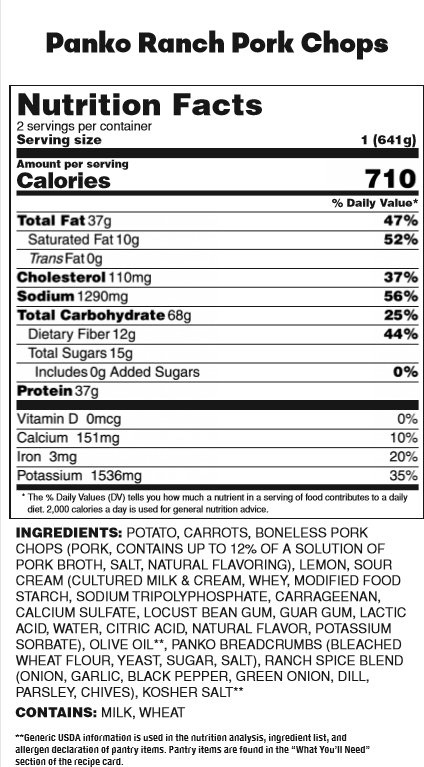 In the Culinary Medicine classes we hold for medical students and healthcare professionals, programs like EveryPlate and Blue Apron come up all the time. I am asked whether these might not be good plans for folks to learn about how to cook.

The answer I give is no. The reason is that the companies clearly have incompetent recipe developers on staff in their kitchens. Most of these recipes are just as bad as eating out at chain food restaurants. Last week in our review of EveryPlate's version of Kung Pao Beef I wrote, "I can't imagine that anyone competent is actually working in the kitchen at EveryPlate because these are just terrible recipes." That is especially true with this week's recipe.

For this meal the potatoes are cut into wedges while the carrots are peeled and then cut on the bias into 1-inch pieces. Each vegetable is tossed with "a drizzle of oil" and salt and then both are placed on a baking sheet and placed in a preheated oven to roast for 25-30 minutes.

Note that like the potatoes in the Dijon Chicken recipe, neither the potatoes nor the carrots are ever touched again until you are to take them out of the oven. There's no stirring whatsoever.

While the vegetables are roasting, you then place the pork chops between two pieces of plastic wrap and then pound them until they are both about 1/3 inch thick. (This isn't difficult as the chops are already only about 1/2 inch thick.)

In a plastic bag you place the zest of the lemon, half of the contents of the "Ranch Spice" packet, and the panko. (We substituted 1/3 cup gluten-free panko from our pantry so that I could taste this dish.) Then, no joke, you add A FULL TEASPOON OF SALT to the panko and spice mixture and mix it all together.

This next part is what had my wife and I concerned about our stovetop: the instructions tell you to heat "a 1/3-inch layer of oil in a large pan over medium-high heat." Recall that the pork chops are also 1/3-inch thick - you are essentially deep frying these chops.

We used canola oil for this frying and measured the amount we put in the pan: 1 cup gave us about 1/3 inch of oil. The good news is that the frying didn't make quite as much of a mess as I expected - but the panko didn't stick to the chops very well, either. After cooking the chops 4 minutes per side we removed the chops to a paper-towel-lined plate, and then wonder of wonders! We salted the chops again.

By that time the potatoes and carrots were due to come out of the oven. While the carrots appeared to be evenly cooked, the potatoes were not quite thoroughly cooked and were browned only on one side. If we had tossed the potatoes as they roasted they would have cooked more evenly.

Just before plating we mixed the other half of the "Ranch Spice" packet with the second packet of sour cream, added yet more salt and a squeeze of lemon, and mixed it together to make a "dipping sauce." 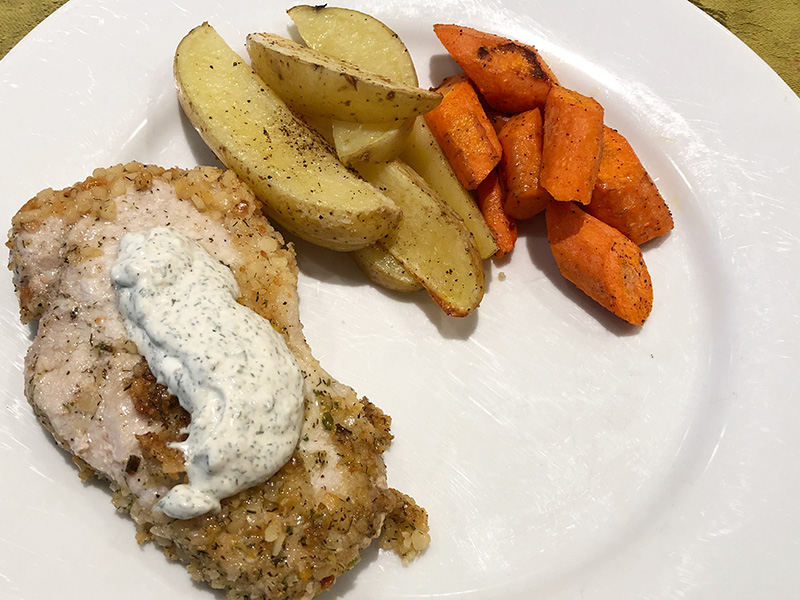 While the potatoes and carrots were just okay - not quite thoroughly cooked but still acceptable - the pork chops were simply disgusting. And it's unfortunate, as they were really very well cooked and quite juicy. They simply were too salty to be edible. As my wife put it, "Like eating a salt lick." Nobody should eat this - nobody.

After the oil we used to cook the chops cooled, we measured the amount left in the pan and found that about 1 tablespoon of the canola oil had been absorbed by the pork chops (granted, some did end up on the paper towel, but not much). Accordingly we included that in our calculation of the nutrition facts for this dish, including the 1 teaspoon of salt. 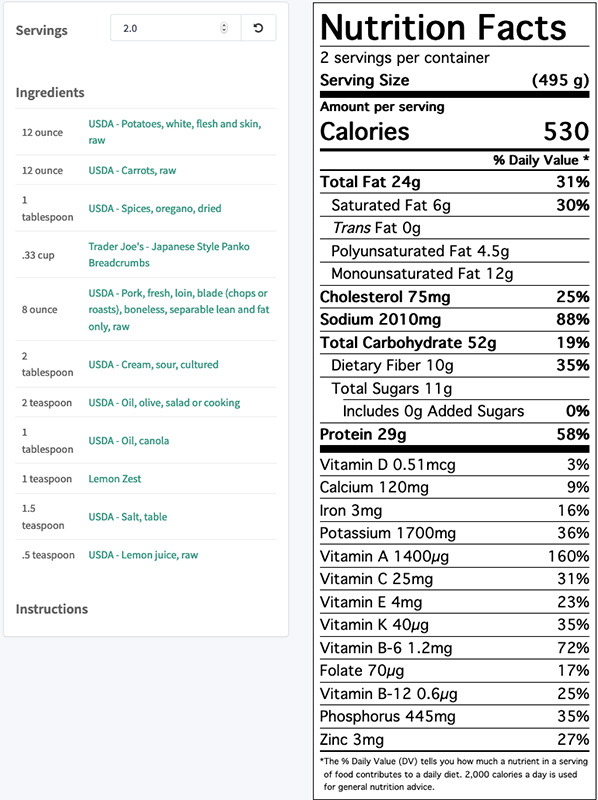 I'm not sure why our calculations are so different in terms of calories, but their calculations simply can't be correct when it comes to the sodium. One teaspoon of salt contains 2,330 milligrams of sodium (per the USDA). Dividing that by 2 is 1,165. Add to that the 1/2 teaspoon of salt added in the instructions (1/4 teaspoon per serving) and that's 1747.5 milligrams of sodium in the added salt alone, not to mention the amount of sodium in the sour cream and whatever might be in the "Ranch Spice". It simply doesn't add up.

Our calculations aside, even if EveryPlate's calculations were correct and the dish only has 1,290 milligrams of sodium, that's still way, way too much salt for any dish.

One last thing: the EveryPlate website says that their meals are "Easy to cook: Our recipes have only 6 simple steps and will turn you into a chef".

Sure, the instruction cards are neatly laid out into six boxes that are labeled "Step 1" through "Step 6." But the first step? Here's what's in "Step 1" for this pork chop dish:

Adjust rack to top position (top and middle positions for 4 servings) and preheat oven to 425 degrees. Wash and dry all produce. Trim, peel, and cut carrots on a diagonal into 1-inch-thick pieces. Cut potatoes into 1/2-inch-thick wedges. Zest and quarter lemon.

I can understand not wanting to go to the store yourself during COVID, but many grocery stores will deliver or have curbside pickup. These delivery services offer the illusion of savings and convenience in return for someone else doing the shopping. Instead, make your own Panko Pork Chops with Ranch Dressing along with Roasted Root Vegetables and Yam Home Fries and save both money and the planet.