These days I love trolling through the grocery store looking for gluten free products. There's been an explosion of offerings in the last few years and some of it is really good. The products have even gone more mainstream. Walking through the grocery I came across Ian's products. I have seen them here and there before, but this was a full display.

We started with the Mac and No Cheese. This is not bad (but it's not all that good either). There's rice elbow macaroni and a cheese-like substance that's creamy when it comes out of the microwave. The flavor is, well... bland and only sort of cheesy. It's better than Kraft Mac 'n Cheese but that's not saying much. The noodles are chewy and not gummy, but the sauce is bland. One taster described it as "cheese scented." At 270 calories and 4 grams of fiber, this isn't too bad for your child, but there is 640 mg of sodium per serving. 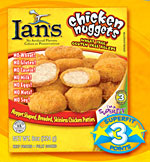 The Chicken Tenders fared much better. I don't have kids, but I would do everything in my power to not feed them processed chicken pieces, even though I realize that there's some sort of powerful magnetic pull that these things have on children. As chicken nuggets go these are probably the best on the market. The chicken is pieces of real chicken (not some sort of pressed product). It's tender and tastes like chicken. The crust is a slightly crispy cornmeal coating with a nice herbed flavor. Any kid would love these and there's nothing artificial about them. A box is 320 calories and only 410 mg of sodium (no fiber, but we didn't really expect that). Even a McDonald's kid would never know these were better for them. 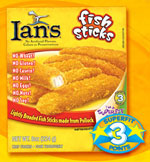 The fish sticks were also pretty good. The similar cornmeal crust was far better than traditional breaded fish sticks and the fish was light and tasty. Eight fish sticks comes in at 380 calories and about 610 mg of sodium so not too bad. Like the chicken tenders these were much better than any conventional fish stick on the market.

The French Bread Pizza was just plain awful. There's just too many better gluten free pizzas on the market, including some from Amy's and Glutino (Glutino owns Ian's, by the way, so you would think they'd do a better job than this). The flavor of the tomato sauce is harsh and actually has a chemical taste to it. The bread isn't bad, with a crispy crust, but the soy cheese is pretty terrible. The numbers aren't all that great either, at 220 calories and 350 mg of sodium (make no mistake, your child would need to eat two of these but it doesn't matter, because they would think they are gross). 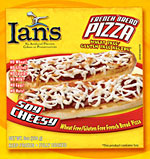 It's nice to see gluten-free products more mainstream, and the nuggets and fish sticks are actually pretty good. Compared to the kids offerings from Amy's, these are like dining at the Ritz-Carlton. The real drawback is the price. Each package is effectively one serving for a growing child and starts at about $4.00. You can make a heck of a great meal in a hurry for $4.00 and maybe even one that would have leftovers so your kid would have something healthy to take for lunch.